The Confederate Civil War submarine, the H.L. Hunley was completely unveiled for the first time earlier this month after a decade of repairs and restoration work on the vessel.

First raised from the ocean floor near Charleston, South Carolina in 2000, the 42 foot long submarine has been partially obscured from the public eye while undergoing its 22-million-dollar restoration at Charleston conservation laboratory at the Charleston Navy Yard. 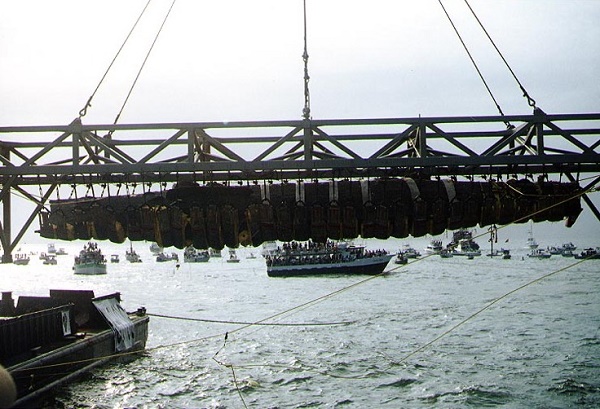 Launched in 1863 off the coast of Charleston, the Hunley sank enemy ships during the Civil War by ramming spikes tethered to explosive charges into ship’s hulls.

Designed by Horace Hunley and built in Mobile, Alabama, the Hunley is made from cast iron and wrought iron and maneuvered through the water with hand-crank propellers.

Although highly effective at destroying enemy ships, the Hunley sank at least three times during its military career, killing a total of 13 crew members, including its inventor Horace Hunley.

It first sank in August of 1863 during a training exercise, killing five members of the crew. It sank a second time a few months later in October, this time killing all eight members of the crew, including Horace Hunley himself, who was steering the submarine.

After each sinking, the Confederates hauled the submarine back up to the surface, removed the bodies and planned the Hunley’s next attack.

According to a recent article by Reuters, historical documents describe workers cutting bodies into pieces to remove them from the sunken submarine.

The Hunley sank for the last time shortly after it destroyed the Union ship, the Housatonic, with a 135 pound torpedo in February of 1864.

It is not known exactly what caused the submarine to sink, although one theory suggests that it was rammed by the Union ship USS Canadaigua, which was on its way to rescue the Housatonic’s crew.

Another theory suggests the submarine did not get far enough away from the Housatonic before the charge detonated and may have sustained damage in the blast.

Yet another theory suggests the crew ran out of oxygen and suffocated after attaching the explosives.

Painting of the H.L. Hunley by Champan, circa 1863

After sinking, the Hunley remained lost until 1970. When it was finally raised in 2000, scientists had to remove 10 tons of sediment as well as skulls, bones and other human remains from the vessel.

Although innovative, the Hunley was not the world’s first submarine. That title is held by the Turtle, which was a wooden-hulled submarine used in New York Harbor during the Revolutionary War.

Nonetheless, the Hunley was the first submarine designed for the open ocean and built specifically for warfare.

Restoration work will continue on the submarine as scientists attempt to remove corrosion from the submarine’s hull and preserve its outer skin.

Although it is currently on display in a tank of fresh water to prevent rust, it will eventually be displayed in open air.