Although the majority of these generals were from the south, a handful of them were also from the north.

These generals were often military professionals who were trained at military academies like West Point. A number of them were also generals in the United States Army when the Civil War broke out and resigned in order to join the Confederacy. 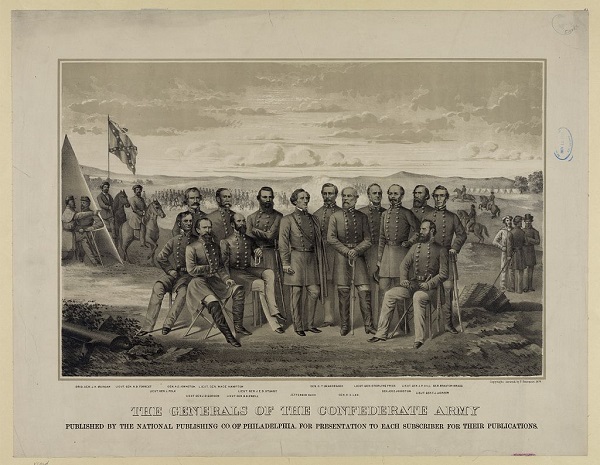 The Generals of the Confederate Army, illustration, circa 1879

The following are some facts about Confederate generals in the Civil War:

How Many Confederate Generals Were in the Civil War?

There were approximately 425 Confederate generals in the Civil War (Warner xix).

How Many Confederate Generals Were Killed in the Civil War?

A total of 73 Confederate generals were killed or mortally wounded in battle during the Civil War, according to William F. Fox in his book Regimental Losses in the American Civil War, 1861-1865 (571-572).

Yet, Ezra J. Warner states in his book, Generals in Gray, that 77 generals were killed in battle (Warner xix).

Warner also states that an additional 15 Confederate generals died by accident or from natural causes, two were killed in “personal encounters” (duels), one was assassinated and one committed suicide.

The following is a list of Confederate generals who were either killed or mortally wounded in battle during the Civil War (Fox 571-572):

Both President Abraham Lincoln and President Andrew Johnson issued a series of proclamations that pardoned the confederates but Confederate military leaders, government officials and many others were excluded from the earlier proclamations and weren’t pardoned until 1867.

Officers of Confederate Army and Navy, illustration published in the Short History of Confederacy circa 1890

On December 8, 1863, President Lincoln issued Proclamation 108 which was a Proclamation of Amnesty and Reconstruction that granted a full pardon and restoration of property to all “persons who have, directly or by implication, participated in the existing rebellion” except for the highest Confederate officials and military leaders:

“The persons excepted from the benefits of the foregoing provisions are all who are, or shall have been, civil or diplomatic officers or agents of the so-called Confederate government; all who have left judicial stations under the United States to aid the rebellion; all who are, or shall have been, military or naval officers of said so-called Confederate government above the rank of colonel in the army or of lieutenant in the navy; all who left seats in the United States congress to aid the rebellion; all who resigned commissions in the army or navy of the United States and afterwards aided the rebellion; and all who have engaged in any way in treating colored persons, or white persons in charge of such, otherwise than lawfully as prisoners of war, and which persons may have been found in the United States service as soldiers, seamen, or in any other capacity.”

On March 26, 1864, President Lincoln issued Proclamation 111 which clarified that the proclamation of December 8, 1863 only applied to persons who were not in military, civil or naval confinement or custody at the time.

On May 29, 1865, President Andrew Johnson issued Proclamation 134 which granted a full pardon and restoration of all rights to participants in the rebellion but again excluded Confederate military leaders above the rank of colonel and Confederate military and naval officers who were educated by the government at West Point Academy or the United States Naval Academy.

On September 7, 1867, President Andrew Johnson issued Proclamation 167 which modified the May 29, 1865 proclamation to include “all persons who, directly or indirectly, participated in the late rebellion, with the restoration of all privileges, immunities, and rights of property…” This proclamation officially pardoned Confederate military leaders and others who had been previously excluded.

On July 4, 1868, President Andrew Johnson issued Proclamation 170 which granted a full pardon and amnesty for the charge of treason to “every person who, directly or indirectly, participated in the late insurrection or rebellion” except for people currently under indictment for the charge.

On January 9, 1867, President Johnson sent Congress a list of high level former Confederates for whom he had issued pardons. The Nashville Telegraph and Union published a partial list of these names on January 13, 1867. The following are the names of Confederate generals from that list:

On December 25, 1868, President Andrew Johnson issued Proclamation 179 which was a final proclamation granting full pardon and amnesty for the offense of treason “to every person who, directly or indirectly, participated in the late insurrection or rebellion.” 3 thoughts on “Confederate Generals in the Civil War”