Gettysburg is historic for many reasons, not just because of the famous Battle of Gettysburg that occurred there in 1863.

In 1937, it was discovered that dinosaurs and prehistoric creatures once roamed the area around the Gettysburg battlefield and left traces of their existence behind on slates of shale, known as Gettysburg shale.

On July 27, 1937, Elmer R. Hite, discovered dinosaur footprints in a boulder near York Springs at Trostle’s Stone Quarry. The footprints were discovered when Hite was quarrying stone and shale a few miles from the battlefield and saw the markings embedded in the stone, as the magazine Science News reported in 1937:

“Gettysburg battlefield, where the Blue and Gray hosts surged to battle, was tramped over by primitive dinosaurs 180 million years ago. Their tracks, indicating that they were two-legged bears about the size of human beings, were discovered near the famous Civil War site in the course of quarrying stone for a bridge. Slabs of the shale rock containing the tracks have been taken to the Smithsonian Institution and are being studied by staff paleontologists. The shale formation in which the ancient prints were found is of the Triassic age, the earliest of the three great geologic periods when reptiles ruled the Earth. Early dinosaurs were not nearly so large as those appearing later; the largest footprints found at the Gettysburg site are only about 6 inches long, with a stride of about 30 inches. Other, smaller tracks indicate that some of the dinosaurs were no bigger than chickens.”

Geologists believed the footprints came from a species of dinosaur that was only four feet tall. According to a 1937 article in the Reading Eagle newspaper, scientists suggested the dinosaurs left their footprints in the area while walking the muddy shores of an ancient lake. Millions of years later that mud hardened into what became known as Gettysburg shale, a type of soft red shale commonly found in the area.

The prehistoric creatures were possibly drawn to the area to feed at the lake, according to a scientist, Dr. Charles Gilmore, interviewed by the Reading Eagle:

“They seem to have been engaged in leisurely feeding. They often dropped forward so that their front feet were impressed in the mud. Most of the front feet tracks show traces of claws. Their makers were probably flesh-eaters, perhaps grubbing their living from the lake shore ooze. But some show no evidence of claws. They may have been plant browsers, the forerunners of the herbage-eating dinosaurs who developed into the Titans of the race.”

The article states that about 150 footprints were discovered and the best specimens were donated to the Smithsonian Museum, the Pennsylvania Museum and the Carnegie School of Technology.

Dinosaurs weren’t the only visitors to Gettysburg. Runaway slaves often sought shelter under the outcrop of rocks along the battlefield and Native Americans used the area as a hunting ground and battle ground, according to the book Gettysburg by Dolly Nasby:

“Dinosaur footprint were found in 1937 on a stone in Trostle’s Stone Quarry, about four miles from York Springs. The Smithsonian Institute, the Pennsylvania Museum and the Carnegie School of Technology all have those prints on display. Eons after the dinosaurs became extinct, Native Americans lived in that area. There is evidence that a large Native American battle took place in a large field at the Slyder Farm long before the Battle of Gettysburg. Native American relics have been found to confirm a camping ground for wandering tribes at the western base of Big Round Top. Some of the tribes that frequented the area include Nanticokes, Susquehannocks, Shawnees and Delawares.”

According to Nasby, when William Penn and his settlers arrived in the 17th century, they signed a treaty with the local Native American tribes. In 1736, the Iroquois sold the land in what is now Adams County to the family of William Penn and were forced to leave the area in 1737.

More settlers arrived and in October of 1787, Gettistown was established. The town was later renamed Gettysburg in 1800. 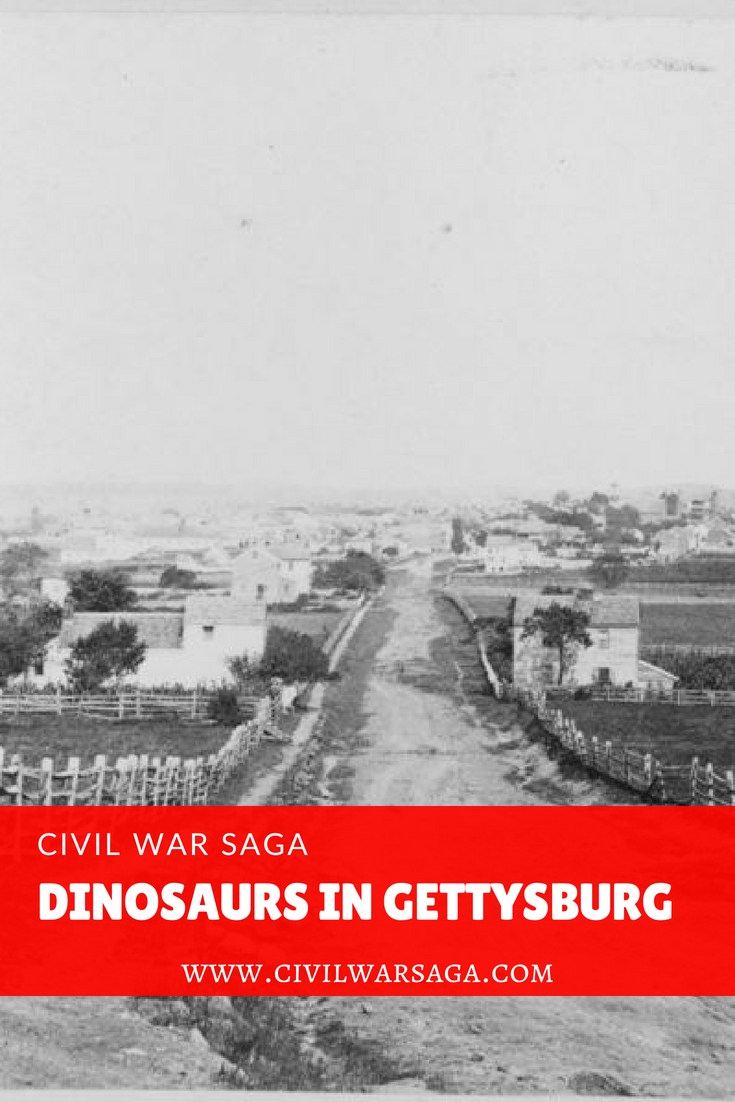 1 thought on “Dinosaurs in Gettysburg”