Jefferson Davis was a statesman and President of the Confederate States of America during the Civil War.

Davis was born in Fairview, Kentucky on June 3, 1808 to Revolutionary War veteran Samuel Davis and Jane Cook but was raised on his older brother’s cotton plantations in Mississippi and Louisiana.

Davis was educated at Transylvania University and graduated from West Point academy in 1828 with fellow cadet Robert E. Lee.

After leaving West Point, Davis began his military career serving as a lieutenant in the Black Hawk War, which his later political nemesis, Abraham Lincoln, also fought in.

The Black Hawk War was a conflict between the United States government and Native-Americans led by a Sauk war chief known as Black Hawk, in 1832.

Davis’ regiment caught Black Hawk himself at the Battle of Bad Axe, and Black Hawk later recounted in his autobiography that he was treated kindly by Davis:

“We started to Jefferson Barracks in a steamboat, under the charge of a young war-chief [Lieutenant Davis], who treated us all with much kindness. He is a good and brave young chief, with whose conduct I was much pleased. On our way down we called at Galena, and remained a short time. The people crowded to the boat to see us, but the war-chief would not permit them to enter the apartment where we were, knowing from what his own feelings would have been, if he had been placed in a similar situation, that we did not wish to have a gaping crowd around us.”

After resigning from the army in 1835, Davis married the daughter of Colonel Zachary Taylor, Sarah Knox Taylor, and ran a plantation. His marriage ended a few months later when his wife died suddenly of malaria. Davis continued running his plantation for the next 10 years.

Davis remarried in 1845, to an 18-year-old woman named Varina Howell, and was elected to Congress as a Democrat the same year.

When the Mexican war broke out the following year, he resigned from Congress and rejoined the military. During the war he commanded a regiment of Mississippi soldiers and earned a reputation as a brave military leader.

In 1847, Jefferson Davis was elected to the Senate and became a spokesperson for southern rights. During his time as Senator, Davis argued against Secession but agreed each state had the right to secede, if they desired.

Davis then served as Secretary of War under President Franklin Pierce in 1853 before returning to the Senate when the Pierce’s term came to an end.

Jefferson Davis as the Confederate President:

When the Civil War began in 1861, Davis resigned from the Senate and was elected to a six year term as President of the Confederate States of America. 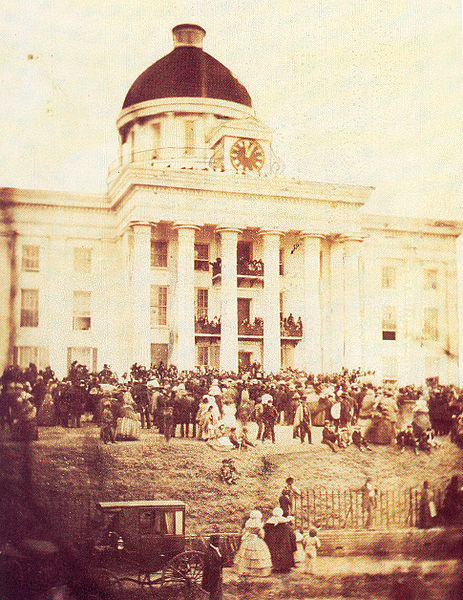 Jefferson Davis’ inauguration in Montgomery, AL in February of 1861

As president, he failed in his efforts to raise funds and supplies from foreign countries, struggled to stop the Union army from marching through the south and watched as the southern economy collapsed on itself.

Davis was captured by the Union army’s 4th Michigan cavalry on May 10, 1865 in Georgia, and was charged with treason.

Some sources claim that when Davis was caught, he was dressed in women’s clothing in order to disguise his identity. According to Davis in his book The Rise and Fall of the Confederate Government, this is partially true but it was mostly due to a wardrobe mix up when he was attempting to flee approaching Union soldiers:

“As it was quite dark in the tent, I picked up what was supposed to be my ‘raglan,’ a water-proof, light overcoat, without sleeves; it was subsequently found to be my wife’s, so very like my own as to be mistaken for it; as I started, my wife thoughtfully threw over my head and shoulders a shawl.”

Imprisoned for two years at Fort Monroe in Virginia, the U.S. government never officially tried Davis yet stripped him of his citizenship.

Although Davis was against reconstruction in the south, he later encouraged southerns to be loyal to the Union and accept reconciliation.

Davis published his two-volume memoir The Rise and Fall of the Confederate Government in 1881 and dedicated it to “the memory of those who died in defense of a cause consecrated by inheritance, as well as sustained by conviction.”

Jefferson Davis died in New Orleans on December 6, 1889 from acute bronchitis and was buried first at the Metairie Cemetery in New Orleans and then in Hollywood Cemetery in Richmond, Virginia. His citizenship was posthumously reinstated in 1978. 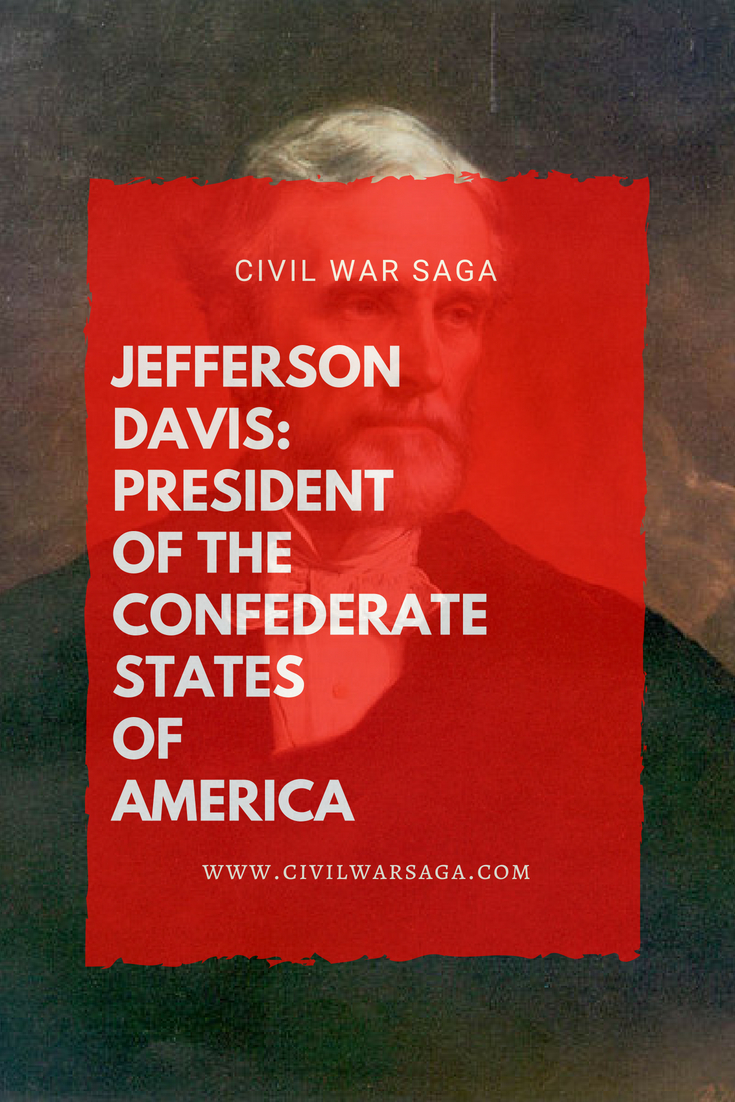