When John Wilkes Booth fled Ford’s Theater on April 14, 1865 and was killed on a farm in Virginia two weeks later, officers found a red leather diary on his body that contained two diary entries, written in pencil, and photos of five women, one of which was his secret fiance Lucy Hale.

The diary also appeared to be missing 54 pages from the front of the book and an additional 32 pages from the back, all of which had been cut out with a knife.

According to the book “Right or Wrong, God Judge Me: The Writings of John Wilkes Booth,” Booth used two of the cut out pages to write letters to Dr. Richard H. Stewart while he was on the run from the police, but the other pages were unaccounted for. 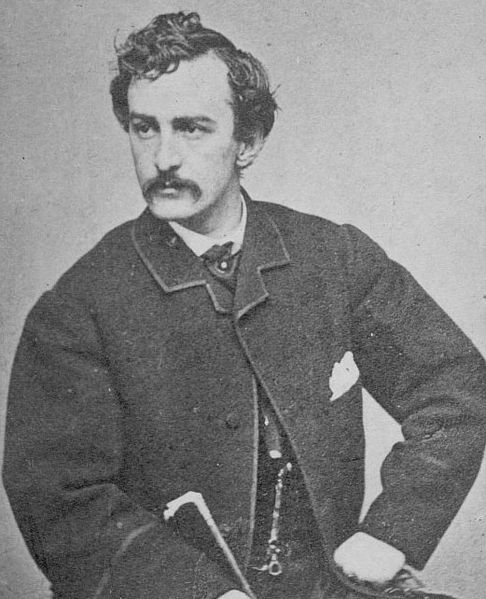 In the two diary entries found in the book, which were later published in the New York Times, John Wilkes Booth defended his actions and denied that killing the president was wrong or immoral.

He also expressed his anger at being hunted by the police and stated he couldn’t understand why he was being persecuted instead of thanked:

“April 13, 14, Friday, the Ides.
Until today nothing was ever thought of sacrificing to our country’s wrongs. For six months we had worked to capture, but our cause being almost lost, something decisive and great must be done. But its failure was owing to others, who did not strike for their country with a heart. I struck boldly, and not as the papers say. I walked with a firm step through a thousand of his friends, was stopped, but pushed on. A colonel was at his side. I shouted Sic semper before I fired. In jumping broke my leg. I passed all his pickets, rode sixty miles that night with the bone of my leg tearing the flesh at every jump. I can never repent it, though we hated to kill. Our country owed all her troubles to him, and God simply made me the instrument of his punishment. The country is not what it was. This forced Union is not what I have loved. I care not what becomes of me. I have no desire to outlive my country. The night before the deed I wrote a long article and left it for one of the editors of the National Intelligencer, in which I fully set forth our reasons for our proceedings. He or the gov’r-… After being hunted like a dog through swamps, woods, and last night being chased by gunboats till I was forced to return wet, cold, and starving, with every man’s hand against me, I am here in despair. And why? For doing what Brutus was honored for. What made Tell a hero? And yet I, for striking down a greater tyrant than they ever knew, am looked upon as a common cutthroat. My action was purer than either of theirs. One hoped to be great himself. The other had not only his country’s but his own, wrongs to avenge. I hoped for no gain. I knew no private wrong. I struck for my country and that alone. A country that groaned beneath this tyranny, and prayed for this end, and yet now behold the cold hands they extend to me. God cannot pardon me if I have done wrong. Yet I cannot see my wrong, except in serving a degenerate people. The little, the very little, I left behind to clear my name, the Government will not allow to be printed. So ends all. For my country I have given up all that makes life sweet and holy, brought misery upon my family, and am sure there is no pardon in the Heaven for me, since man condemns me so. I have only heard of what has been done (except what I did myself), and it fills me with horror. God, try and forgive me, and bless my mother. Tonight I will once more try the river with the intent to cross. Though I have a greater desire and almost a mind to return to Washington, and in a measure clear my name – which I feel I can do. I do not repent the blow I struck. I may before my God, but not to man. I think I have done well. Though I am abandoned, with the curse of Cain upon me, when, if the world knew my heart, that one blow would have made me great, though I did desire no greatness. Tonight I try to escape these bloodhounds once more. Who, who can read his fate? God’s will be done. I have too great a soul to die like a criminal. Oh, may He, may He spare me that, and let me die bravely. I bless the entire world. Have never hated or wronged anyone. This last was not a wrong, unless God deems it so, and it’s with Him to damn or bless me. As for this brave boy with me, who often prays (yes, before and since) with a true and sincere heart – was it crime in him? If so, why can he pray the same?
I do not wish to shed a drop of blood, but ‘I must fight the course.’ ‘Tis all that’s left to me.'”

The diary was taken off of John Wilkes Booth’s body by Colonel Everton Conger and passed around to various military officials, including the Secretary of War Edwin Stanton and General Joseph Holt, yet it was never introduced as evidence in the 1865 Conspiracy Trial of Booth’s accomplices.

In 1867, the diary was rediscovered in an old war department file and although the two original entries remained intact, much speculation was made over the mysterious missing pages.

Questions were quickly raised and many of the original handlers of the diary were called upon for answers.

Stanton wrote the following letter to President Andrew Johnson, on May 14, 1867, explaining that the pages were already missing when the diary was first discovered on Booth’s body:

“Sir: I have the honor to submit herewith a copy of the entries contained in the memorandum-book found on the person of J. Wilkes Booth at the time of his capture, certified by Gen. Holt, Judge Advocate-General, who has possession of the book, together with his report in relation thereto. The memorandum-book was first seen by me about the 26th day of April, 1865, shortly after Booth’s capture, and a few hours before his remains reached Washington. It was brought to my house by Provost-Marshal Baker and another person, who was, I think, Lieut.-Col. Conger. The book was then examined by me in presence of Gen. Eckert, Assistant Secretary of War, and was found to contain only the entries certified by Gen. Holt, also some photographs of females. Immediately preceding the entries some pages appeared to have been cut out, but there was nothing indicating what had been written thereon, or whether anything had been written, nor when or by whom they had been cut out. Immediately after careful examination of the book and its contents, it was placed in the hands of Gen. Eckert in the same condition as when I first saw it, to be delivered to the Judge Advocate-General, in whose possession after its delivery to him by Gen. Eckert, I am informed and believe, it has continued until the present time. The last time I saw the book was sometime last winter. It was then before the Judiciary Committee of the House of Representatives, and was in all respects in exactly the same condition as when I saw it first, without any change or alteration, so far as I could discover, in its contents. Gen. Eckert reported to me that upon receiving the memorandum-book from me he sealed it up and locked it up in his safe, and it continued in his possession until he delivered it to the Judge Advocate-General, and that it was then in the same condition as when it was first brought to my house by Baker. Very respectfully, your obedient servant, Edwin M. Stanton, Secretary of War, to the President.”

An official report that same year by General Holt also stated that the current condition of the diary was exactly as he first saw it in 1865.

Holt theorized that the missing pages probably contained entries from early 1865 and were most likely destroyed by Booth himself. The pages have never been found and their contents remain a mystery.

After the rediscovery of the diary, it was introduced as evidence in John Surratt‘s trial in June of that same year. According to the book, Trial of John. H. Surratt, rumors began to circulate in the local press that the government had prevented the diary from being introduced as evidence during the 1865 trial because it contained “things they did not want to have known.”

After it was presented to the jury for examination, it was revealed that the diary did not contain anything controversial aside from Booth’s personal feelings about his own actions.

Several witnesses were cross-examined extensively about the condition, former whereabouts and content of the diary and it was read aloud to the courtroom but it ultimately provided no evidence about Surratt’s alleged role in the assassination.

Surratt was later released when the jurors could not reach a unanimous decision, resulting in a mistrial.

The diary is now on display at Ford’s Theater in Washington D.C. 1 thought on “The Diary of John Wilkes Booth”