Unlike his mother and the eight other conspirators hanged for Abraham Lincoln‘s assassination, John escaped punishment for his role in the murder after his trial resulted in a mistrial.

John Surratt was working as a Confederate courier and spy during the Civil War when he was introduced to John Wilkes Booth by Dr. Samuel Mudd in December of 1864.

Booth and Surratt met several times before Booth asked Surratt to help kidnap Lincoln and exchange him for Confederate prisoners. Surratt considered the idea for several days and finally agreed.

The ambush was thwarted when Lincoln changed his plans at the last minute and did not visit the hospital. After the abduction plan fell through, Booth allegedly convinced the group that assassinating the president was the only option.

During a lecture John Surratt gave in 1870, he denied he had any knowledge of the plan and claimed that on April 6th he had traveled to Montreal, alongside fellow spy and courier Sarah Slater, who had since disappeared, to deliver Confederate dispatches.

Surratt stated he then traveled to Elmira, New York to investigate notorious Union prison camp, Elmira Prison, where he remained until he heard about Lincoln’s assassination and discovered he himself had been accused of attacking Secretary William H. Seward:

“On Monday when I was leaving Canandaigua I bought some New York papers. In looking them over, my eye lit on the following paragraph which I have never forgot, and don’t think I ever will. It runs thus: ‘The assassin of Secretary Seward is said to be John H. Surratt, a notorious secessionist of Southern Maryland. His name, with that of J. Wilkes Booth, will forever lead the infamous role of assassins.’ I could scarcely believe my senses. I gazed upon my name, the letters of which seemed to sometimes grow as large as mountains and dwindle away to nothing. So much for my former connection with him I thought. After fully realizing the state of the case, I concluded to change my course and go direct to Canada.”

In Montreal, friends hid Surratt in a series of houses and hotels while detectives, tipped off about his location by his friend Louis J. Weichmann, swarmed the city looking for him.

Later that summer, he hid out in a small village just outside the city, where he read in the news that his mother Mary Surratt had been arrested, tried and hanged for her role in the conspiracy.

In September of 1865, Surratt fled Canada on a steamship to Liverpool, England. He served under the alias John Watson in Ninth company of the Pontifical Zouaves in the Papal states before an old friend recognized him and alerted authorities.

Surratt was arrested and sent to Velletri prison but escaped and traveled to the Kingdom of Italy, posing as a Canadian citizen, before setting off to Alexandria, Egypt where he was arrested by U.S. Officials on November 23, 1866 and sent back to the U.S.

When Surratt was finally tried in 1867, the statute of limitations had run out on all the charges except murder. His name had already been cleared in the assassination attempt of Secretary Seward when it was discovered that it was Lewis Powell who had attacked Seward.

Although Surratt’s attorney admitted to Surratt’s role in the kidnapping plot, he denied any involvement in the murder. The prosecution had little evidence against Surratt and the case eventually ended in a mistrial when the jury could not reach a verdict.

After the trial, in 1870, Surratt began a public lecture tour, during which he explained why he agreed to kidnap Lincoln:

“I hope you will not blame me for going thus far. I honestly thought an exchange of prisoners could be brought about could we have once obtained possession of Mr. Lincoln’s person. And now reverse the case. Where is there a young man in the North with one spark of patriotism in his heart with would not have with enthusiastic ardor joined in any undertaking for the capture of Jefferson Davis and brought him to Washington? There is not one who would not have done so. And so I was led on by a sincere desire to assist the South in gaining her independence.”

Although Surratt’s lecture in Rockville, Maryland was well received, due to public outrage, his lecture in Washington D.C. was canceled. Surratt later took a job as a teacher and married a relative of Francis Scott Key. The couple lived in Baltimore and had seven children.

Surratt died at the age of 72 from pneumonia and was buried in the New Cathedral Cemetery in Baltimore. 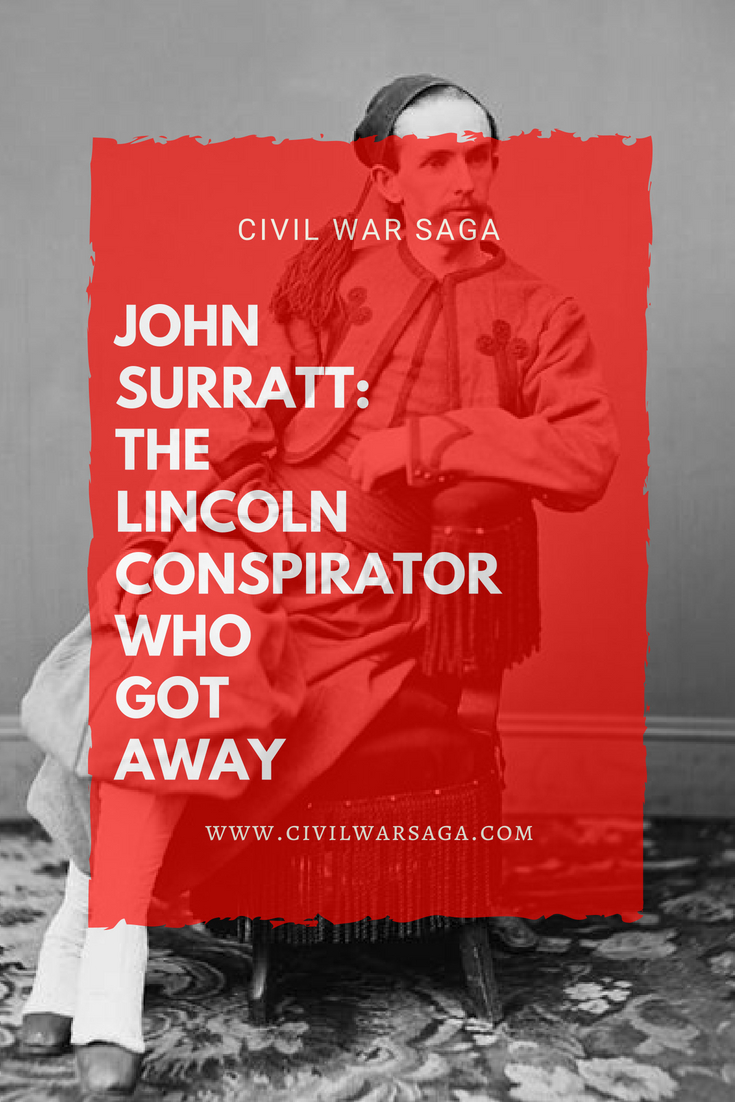 6 thoughts on “John Surratt: The Lincoln Conspirator Who Got Away”