The Confederates had their own Lincoln, Private Abraham B. Lincoln of Company F in the 1st Virginia Cavalry. What’s even stranger is that the two Lincolns were related.

According to an article in The Pennsylvania-German magazine, both President Abraham Lincoln and Private Abraham B. Lincoln were the great-grandsons of John Lincoln of Pennsylvania, which makes them second cousins.

While serving as a Congressman in 1848, the future President Abraham Lincoln learned of the possible connection to the Lincoln family in Virginia and wrote to Private Abraham B. Lincoln’s father, David Lincoln, asking about any family connection. Grave of Abraham B. Lincoln in Lacey Spring, Virginia

David Lincoln, a farmer and inn-keeper in Lacey Spring, replied with his family history, to which Congressman Lincoln wrote back:

“Last evening I was much gratified by receiving and reading your letter of the 30th of March. There is no longer any doubt that your uncle Abraham and my grandfather was the same man…I think my father has told me that grandfather had four brothers, Isaac, Jacob, John, and Thomas. Is that correct? And which of them is your father? Are any of them alive?”

David Lincoln was, in fact, the son of Jacob Lincoln, but Jacob had passed away in 1822.

As Private Abraham B. Lincoln, who was born in 1822, was 26 years old at the time Congressman Lincoln sent the letter, it is almost certain the two Abraham Lincoln’s knew about each other, although it is not known if they ever had any contact.

When the Civil War broke out in the 1860s, Private Abraham B. Lincoln found himself fighting in the Confederate army, but eventually deserted in 1864. Desertion among Confederate soldiers became common as the war raged on and food, clothing and pay for the soldiers dwindled.

According to the book Desertion During the Civil War, Confederate deserters almost always returned to their communities after deserting, so it is likely that Lincoln returned to his wife and five children in Virginia.

Near the end of his life, in 1903, Private Abraham B. Lincoln gave a series of interviews with local Virginia newspapers, identifying himself as the late president’s cousin.

Two years later, he passed away at the age of 83, and was buried at Lacey Spring Cemetery next to his wife, Mary E. Hughes.

Lincoln had other interesting family members and unexpected family connections as well. In addition to his Confederate cousin, Lincoln was also related to Paul Revere through a series of marriages on his father’s side of the family and the Lincoln family had deep Massachusetts roots that reached as far back as the early 17th century, according to the book Abraham Lincoln and His Ancestors:

“The same reasons that brought the first American ancestor of Abraham Lincoln to the Massachusetts coast drove his successors deeper and deeper into the new world. Samuel Lincoln came to America in 1637 because of the discontent of his family and friends with religious, civil, and economic conditions. He came, too, because he was young and a wide ocean and a mysterious land invited him. In every American generation he fathered there were one or more men who, like him, pushed ahead into unbroken territory, allured by the hope of larger wealth, of greater freedom of action and thought, of more congenial companionship, and always by the mystery of the unknown, the certainty of adventure.”

It seems that Lincoln had many adventurous ancestors and relatives who seem determined to take their own unique path in life. 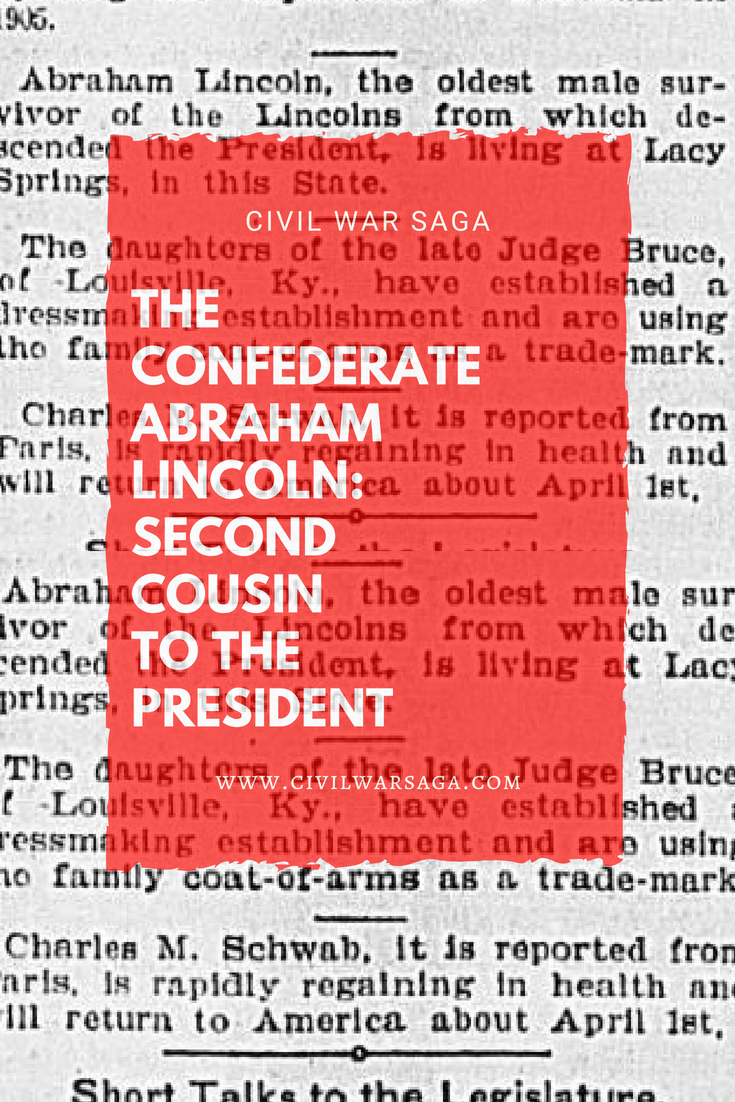 3 thoughts on “The Confederate Abraham Lincoln: Second Cousin to the President”