There were many catalysts in the build up to the Civil War, and although slavery was at the heart of the war, many other factors played a part as well.

The north and south had vastly different economies. The north made money from factories and manufacturing while the south relied on agriculture for its main income.

Since the country was first settled, the U.S. imported most of its goods from Europe. Eventually, the north was able to produce more and more of the goods the U.S. needed.

In 1828, northern politicians forced the south to buy goods from the north by passing federal laws that placed high taxes on goods imported from Europe.

This angered many southerners, according to the book Causes of the Civil War: Differences Between the North and the South:

“The Tariff of 1828 was almost more than [Vice President John C.] Calhoun and many other southerners could tolerate. The tariff was raised on imported textiles, manufactured goods, and a variety of raw materials produced in the West. The new tariffs were as high as 50 percent on some items. The south believed it saw no direct benefit from the tariff. The only items protected by the tariff were items the south did not produce. Because tariffs allowed domestic producers to charge more for their products, southerners understandably felt cheated. They believed the Tariff of 1828 was outrageous, calling it the “Tariff of Abominations.”

A debate raged on about the tariff for a few years until another tariff was passed in 1832 that increased taxes on manufactured cloth and iron, further enraging southerners.

South Carolina threatened to seceed but changed its mind when Calhoun suggested nullification. The state legislature agreed and nullified the tariff.

The federal government viewed nullification as treasonous and responded with a “force bill” that allowed the president to use Navy and Army power to enforce Congressional acts.

Finally, both sides reached a compromise, allowing the tariff to continue only if it decreased each year between the years 1833 to 1842 until the tariff was at roughly the same rate as it was in 1816, according to the book Causes of the Civil War:

“Calhoun lost the battle over nullification. The Senator learned a valuable lesson, however: No state can stand alone against the federal government…Thus, the south in 1860 would respond very differently to the question of state’s rights and secession than it had in 1833.”

The north and south had very different opinions about slavery. Although slavery existed in the north, it slowly died out by the 1800s. 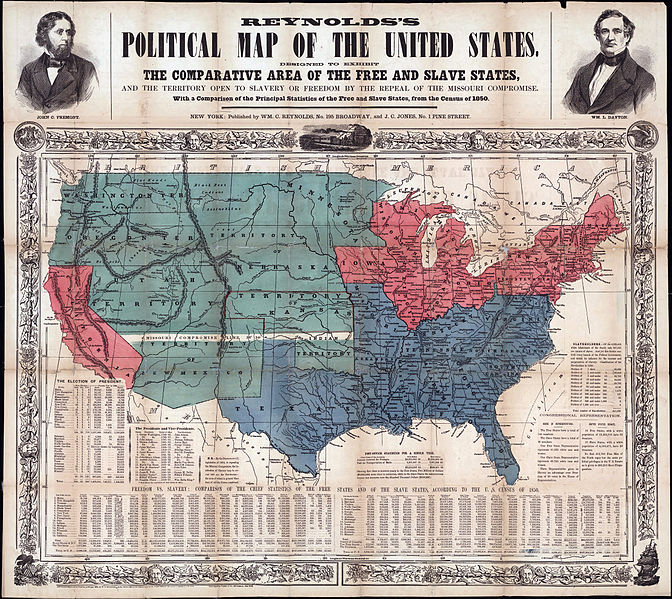 Reynold’s map of free and slave states in the U.S. circa 1856

Many northerners opposed slavery, actively participated in the abolitionist movement and helped runaway slaves escape from the south.

Southerns felt that northerners were trying to control their way of life in the south and felt the government wasn’t working hard enough to protect them and their right to own slaves.

Southern agriculture, especially the production of cotton, relied very heavily on the use of slaves and southerns felt if their right to own slaves was taken away they would be financially ruined.

There has been much debate over the past few centuries about whether or not slavery was the main cause of the Civil War and although there were many factors in the war, slavery was clearly a major factor.

Expansion Into the West

As the country expanded westward, more states were added to the union. The land in many of these states did not support agriculture so they often became “free” states.

Southerners felt if the number of “free” states continued to grow they would weaken the power and influence that slave states had in the union.

In March of 1784, Thomas Jefferson first tried to ban slavery in the western territories in a draft ordinance, which read “that after the year 1800 of the christian era, there shall be neither slavery nor involuntary servitude in any of the said states, otherwise than in punishment of crimes . . .” but southern politicians had the ban deleted in the report for the committee overseeing the plan to create a temporary government of the Western Territory.

In 1787, the Northwest Ordinance officially banned slavery in the Northwest territories (in what became the states of Ohio, Indiana, Illinois, Michigan and Wisconsin).

In 1820, the Missouri Compromise banned slavery in the Louisiana territory but this ban was repealed in 1854 with the Kansas-Nebraska act.

A few years later, in 1857, the Northwest Ordinance and the Missouri Compromise ban were deemed unconstitutional during the Dred Scott v. Sanford case.

When Republican candidate Abraham Lincoln, a republican who opposed the expansion of slavery, won the election in 1860 it triggered the secession of numerous southern states and eventually led to the start of the Civil War a year later, according to the book Revolts, Protests, Demonstrations and Rebellions in American History:

“Abraham Lincoln was not an abolitionist, but his pledge to restrict slavery to the states where it already existed was enough to convince seven states in the Lower South to secede from the Union following his election. When Lincoln called for 75,000 volunteers to suppress the rebellion after the fall of Fort Sumter, Virginia led four more states in the Upper South into the new Confederacy. By the summer of 1861, the Union and the Confederacy were poised to fight a terrible Civil War.”

The first state to secede was South Carolina in December of 1860 followed by Mississippi, Florida, Alabama, Georgia, Louisiana, Texas, Virginia, Arkansas, Tennessee and North Carolina. Several attempts were made to reunite the states with the Union but they proved to be unsuccessful.

10 thoughts on “The Causes of the Civil War”