In the early days of the war, Civil War soldiers, both the Union and the Confederates wore a variety of uniforms in many different colors such as blue, red, gray, white and even tartan.

There was no standardization of uniforms at the time and there was a lack of central organization to implement such a thing.

It wasn’t until after the war began that both sides started to standardize their uniforms due to the confusion these different colored uniforms caused on the battlefield, according to James Schouler in his book History of the United States Under the Constitution Volume VI 1861-1865:

“The dress of the citizen soldier, North or South, changed with the character of the conflict. There was uniform before the first Bull Run, but not uniformity; armed bodies from either section hastened to the front in State militia dress or such other costume as pleased, and in that portentous battle were worn colors of a peacock variety such as never were worn again. For in no respect, before the war, had our holiday militia taken more pride than in the contrasting uniforms – gray, green, blue, buff, or scarlet – which, with muffs or plummed hats contrasting head-gear, and pet battalion names, made of pageant processions a shifting picture. There were Northern regiments, and possibly Southern also, that sported thus early Garibaldi shirts of red flannel with waistbands, or, like ‘red-legged devils,’ made theatrical display in the Bashi-Bazouk costume of Zouaves, a fad of the times. All such eccentricity toned down when war proved more than a passing exhibition. Sober uniforms came in to distinguish clearly the belligerents.”

At the start of the war, most Confederate soldiers didn’t have official uniforms. The South didn’t have factories to mass-produce uniforms so Confederates often wore locally-made uniforms instead.

Many of these early Confederate uniforms were a yellow-brown “butternut” color. Some Confederate units also wore dark blue, which often led to confusion on the battlefield with the Union troops.

Confederate private infantry uniform, illustration published in the Atlas to Accompany Official Records of Union and Confederate Armies, circa 1895

It wasn’t until June 6, 1861, when the Confederate Council issued General Order 9 which called for new standardized uniforms.

In 1862, Confederate president Jefferson Davis established cadet gray as the official color for the Confederate uniforms.

The uniforms were designed by Nicola Marschall, a German-American artist who also designed the original Confederate flag.

The uniform consisted of a double-breasted gray frock coat, a pair of light “french blue” trousers, white cotton shirts, a forage cap and leather brogan shoes. The frock coat featured facings of various colors on the cuff and collar, depending on the branch of service:

Yellow for cavalry
Red for artillery
Blue for infantry

Confederate soldiers were also issued a single-breasted gray wool shell jacket with facings of the various branch of service colors on the cuff and collar.

The Confederate army identified their officers with collar badges, a series of gold stars for colonels and majors and gold bars for lieutenants, and sleeve badges like chevrons and various other types of insignia, on their frock coats instead of plain facings.

Since the light blue trousers were often difficult to acquire and they caused confusion on the battlefield because of the Union army’s “sky-blue” trousers, they were eventually replaced with gray trousers.

Confederate belts were black or dark brown and had an oval-shaped belt plate that was usually engraved with the Confederate States’ initials, CS or CSA, but sometimes troops wore belt buckles with their home state’s initials.

Towards the end of the war, as the Confederate army ran out of supplies, soldiers wore whatever they could find, including the trousers and caps of Union uniforms, although they often bleached or dyed them to avoid being mistaken for the enemy on the battlefield.

The standard U.S. army uniform at the outbreak of the Civil War was defined by the 1858 regulations. The uniform consisted of a Campaign Uniform, a Parade (Dress) Uniform, and a Fatigue Uniform.

Hats:
The Model 1858 Dress Hat which was a black felt Hardee hat. The brim was pinned with a metallic eagle on the left side for artillery and on the right side cavalry and artillery. The hat was trimmed with a wool cord denoting the arm of service: red for artillery, sky-blue for infantry and yellow for cavalry. Non-regulation kepi hats were usually worn instead of the Hardee hat because soldiers considered the Hardee hat too hot and uncomfortable.

Coat:
A blue knee-length single-breasted frock coat. The collars and cuffs of the coats were edged with cording denoting the arm of service: red trim for artillery, sky-blue trim for infantry and yellow trim for cavalry.

Coat:
A blue knee-length single-breasted frock coat. The collars and cuffs of the coats trimmed with arm of service colors.

Hats:
A blue forage cap with a black leather visor.

Private U.S. infantry fatigue uniform, illustration published in the Atlas to Accompany Official Records of the Union and Confederate Armies, circa 1895

Union uniforms had brass buttons that were often stamped with an eagle with spread wings. In the early years of the war, the buttons were marked with I,C, or A, which stood for Infantry, Cavalry or Artillery.

Despite the 1858 regulations, sometimes Union soldiers wore uniforms of varying colors, particularly gray, in the early days of the war. To prevent confusion on the battlefield, General McClellan officially standardized Union uniforms, as was announced in various newspapers across the country, like this announcement in the Daily Times of Leavenworth on September 14, 1861:

“Must be Blue.—The whole army of the U. S. is to be uniformed in blue. There is to be no more fantastic toggery. Some of the men in the army on the Potomac who were uniformed in grey, are getting ragged, but the Government will not permit any more grey clothes to be used. The boys must wait until they get blue clothes. Gen. McClellan is very energetic in his hostility to all uniforms except the regulation blue.”

Some sources say that gray was the color of choice for Confederate uniforms because it resembled the cadet’s gray uniforms at West Point.

Another source, the Farmer’s Almanac website, states that blue and gray were chosen because old hunters and Indian fighters traditionally wore these colors so they would not stand out at a distance. Because Federal uniforms were already blue when the war began, Confederates had to go with gray.

According to an article titled “Guide to Military Uniforms” on military.com, blue became a traditional color for U.S. uniforms starting in the Revolutionary War when the color was chosen because it was in direct contrast to the red British uniforms.

Both Union and Confederate Zouave soldiers wore bright-colored uniforms, baggy pants and a forage cap, according to a New York Times article by Michael O. Varhola titled “Blue, Gray and Everything in Between”:

“Some of the most familiar of the exotic uniforms, of course, were those worn by zouaves — light infantrymen clad in baggy pantaloons, gaiters, braided jackets, sashes and tasseled fezzes or turbans, clothing more typical of North Africa than North America. Such uniforms were, in fact, inspired by those first worn by French colonial troops in Algeria in the decade before the U.S. Civil War, and both the Union and Confederacy had units that wore them.”

Zouave uniforms were difficult to obtain in America and had to be purchased from specialty clothing manufacturers.

Due to the expense and difficulty obtaining the uniforms, Zouave regiments only kept their uniforms if they could repair and maintain them and, as a result, the uniforms slowly wore out and disappeared by the end of the war.

If you are researching Civil War uniforms for a class project, presentation or Halloween party, check out the following article about Civil War soldier & officer costumes. 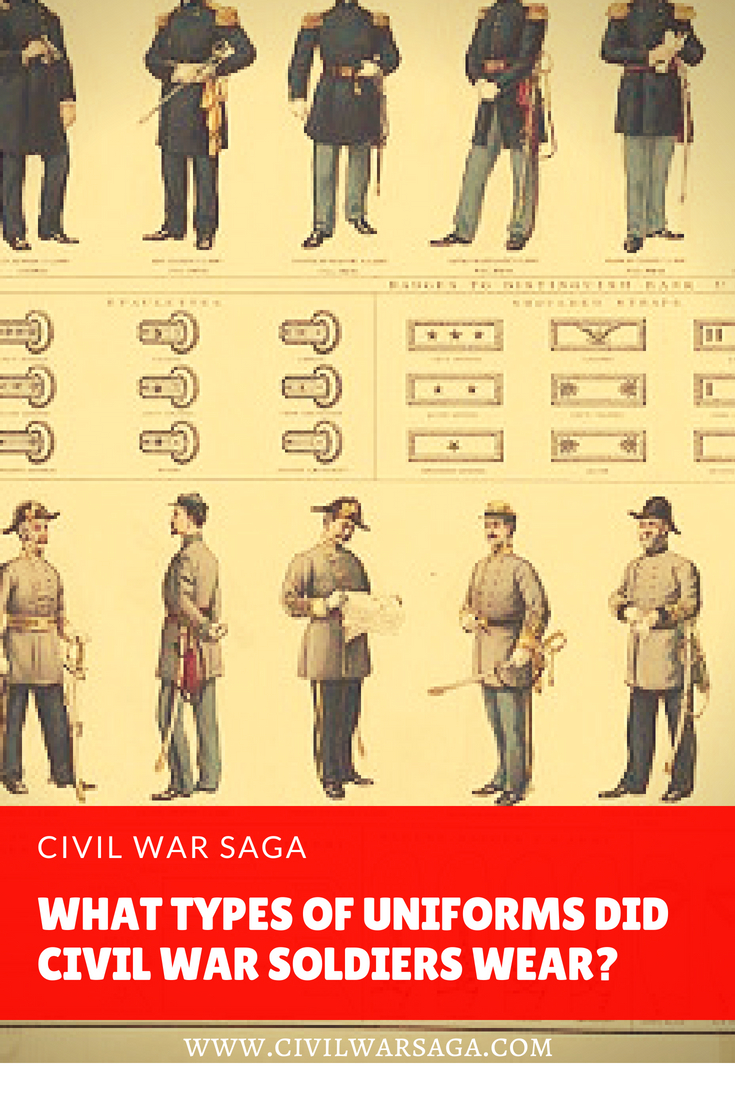 6 thoughts on “What Type of Uniforms Did Civil War Soldiers Wear?”