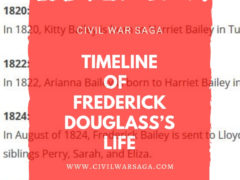 In 1865, British author and editor, Sir Leslie Stephen, published a 30-page pamphlet criticizing The Times of London for its poor reporting on the American Civil War. The pamphlet, titled… Read more » African-Americans played an important part in the Civil War. From soldiers and laborers to nurses and spies, their presence had a significant impact on the outcome of the war. African-American… Read more » Stonewall Jackson was a professor at the Virginia Military Institute in December of 1859 when he was ordered, along with his cadets, to provide security at John Brown‘s execution in… Read more » When Harriet Tubman was working as a nurse during the Civil War, she was assaulted one day in October of 1865 by a train conductor on the Camden & South… Read more » Many of the current Christmas traditions celebrated today actually started during the Civil War era. Although Christmas wasn’t an official holiday until President Ulysses S. Grant made it one in… Read more »