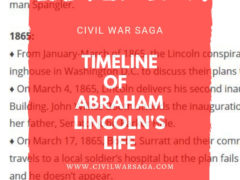 It is often said that more words have been written about Abraham Lincoln than any other person in history, except for Jesus and Shakespeare. This is especially true when it… Read more »