The Confederacy, as it was collectively known, was one of many belligerents who fought in the Civil War.

The United States government never recognized the Confederates States of America as a legitimate government or even as a belligerent (a nation or person engaged in war) but various European countries, such as Great Britain, Spain and Brazil, granted the Confederacy belligerent status, according to an article by the Office of the Historian on the U.S. Department of State website:

“Following the U.S. announcement of its intention to establish an official blockade of Confederate ports in 1861, foreign governments began to recognize the Confederacy as a belligerent in the Civil War. Great Britain granted belligerent status on May 13, 1861, Spain on June 17, and Brazil on August 1. Other foreign governments issued statements of neutrality.”

Which States Were in the Confederacy?

The Confederate states were:

When Did the Confederate States of America Form?

On February 4, 1861, representatives from six states, South Carolina, Georgia, Alabama, Mississippi, Florida, and Louisiana, met at the Montgomery Convention in Montgomery, Alabama to organize the Confederate States of America. 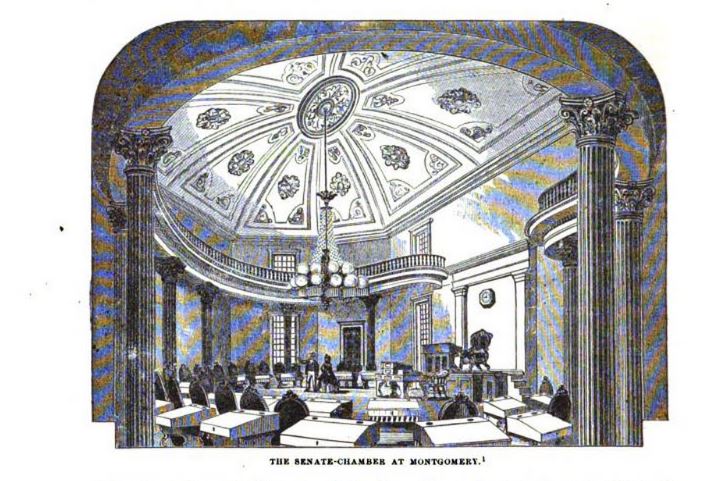 Senate Chamber at Montgomery, illustration published in the Pictorial Field Book of Civil War in United States, Vol 2, circa 1880

On February 8, 1861, the representatives announced the formation of the Confederate States of America, with its capital at Montgomery, Alabama.

Once Virginia joined the Confederacy in April of 1861, the national government was transferred to the city of Richmond in part to defend the strategically important Tredegar Ironworks there.

Who Was the President of Confederate States of America?

On November 6 , 1861, Jefferson Davis was elected President of the Confederate States of America and Alexander H. Stephens was elected Vice President in a general election, in which they ran unopposed.

On February 22, 1862, Davis and Stephens were inaugurated in Montgomery, Alabama.

Did the Confederate States of America Have a Constitution?

A Constitutional Convention was then held at Montgomery, AL from February 28, 1861 to March 11, 1861, during which delegates drafted a permanent constitution of the Confederacy.

The Constitution of the Confederacy was adopted on March 11, 1861 and is almost word for word the same as the constitution of the United States, except for a number of clauses that specifically address the issues that led to political disagreements between the North and the South.

The Confederate Constitution also upholds the ban that is included in the U.S. Constitution on importing slaves from any place other than slaveholding states or territories in the United States but added a clause that demands the Confederate Congress to pass laws to make this ban more effective.

The Confederate Constitution also created a new clause that made slavery legal in all Confederate states and any new territories it may acquire and states that slave owners can take their slaves into these new states or territories. 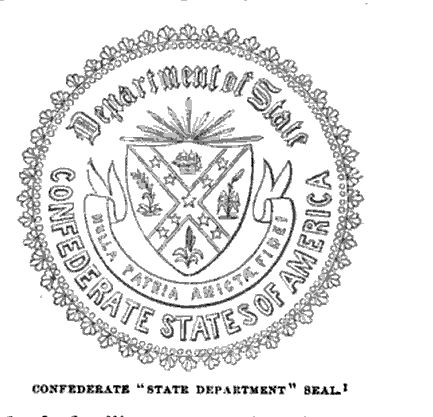 In another clause about how individual rights in each state are universal, the Confederates added a section that states slave holders can legally take their slaves and property into any other Confederate states or territories.

Other changes the Confederates made to their constitution include:

How Was the Confederate States of America Funded?

When the Confederate government was first formed it didn’t have a treasury. To generate the funds that it needed to pay for the Civil War and government expenses, it relied on loans and taxes.

To raise this money, the first thing the Provisional Congress did was pass a tariff law and an act authorizing a loan of $15 million dollars with the pledge of a small export duty on cotton to pay off the debt.

When the “purpose of subjugation became manifest by the action of the Federal Congress” in July of 1861, it became clear to the Confederacy that they were in for a long war and began to find ways to generate more revenue.

The Confederacy’s new plan was to issue treasury notes that could be converted into eight percent bonds with the interest payable in coin. The Confederates felt that any depreciation that might occur from the over-issue of the notes would be kept in check by the holder’s “right to fund the notes at a liberal interest payable in specie” (Davis 122.)

In order to have the money to pay the interest, the Confederate government issued an internal tax and appropriated money from imports.

The plan worked at first until various countries across Europe began issuing policies of neutrality in the war, thus refusing to assist the Confederates financially, and interest rates rose as concern grew that the Confederacy would run out of money

Yet, depreciation continued to be a problem for Confederate currency, according to Davis:

“The chief difficulty apprehended in connection to with our finances up to the close of the war resulted from the depreciation of our treasury notes, the inevitable consequence of their increasing redundancy and the diminishing confidence in their ultimate redemption.”

Military of the Confederate States of America:

The first challenge the Confederate government faced was how to find enough weapons and ammunition for its military, according to Davis:

“At the beginning of the war there were within the limits of the Confederacy 15,000 rifles and 120,000 muskets. There were at Richmond about 60,000 old flint-muskets, and at Baton Rouge about 10,000 old Hall’s rifles and carbines. At Little Rock, Ark., there were a few thousand strands, and a few at the Texas arsenal; increasing the aggregate of serviceable arms to about 143,000. Add to these the arms owned by the several states and by military organizations, and it would make a total of 150,000 for the use of the armies of the Confederacy. There were a few boxes of sabres at each arsenal, and some short artillery swords. A few hundred holster pistols were scattered about. There were no revolvers. Before the war little powder or ammunition of any kind was stored in the southern states, and that little was a relic of the war with Mexico. It is doubtful if there were a million rounds of small-arm cartridges.”

The second problem it faced was how to feed its military, according to Davis:

“To support them it would require that the habits of our planters should be changed from the cultivation of staples for export, which had been their chief reliance in the past, to the production of supplies for home consumption. Hitherto a large proportion of our food-supplies had been imported from the West.”

“The armies and munitions within the limits of the several States were regarded as entirely belonging to them; the forces which were to constitute the provisional army could only be drawn from the several states with their consent and these were to be organized under the state authority and to be received with their officers so appointed…This is clearly seen two facts: how little was anticipated a war of the vast proportions and great duration that ensued; and how tenaciously the sovereignty and self-government of the states were adhered to.”

“Southerns viewed the soldier’s profession as an especially honored one, and a disproportionate number of Southern-born officers held high rank in the U.S. Army in 1860. Three hundred and thirteen officers – nearly one-third of the West Point-trained officers on active duty at the outbreak of war – resigned to join the Confederacy, contributing crucial leadership to the Southern armies.”

On April 16, 1862, the Confederate government also enacted a draft law.

Another issue the Confederate government faced was its lack of a navy, according to Davis::

“As the construction of vessels had been monopolized by the North, we found ourselves, on the opening of hostilities, without a navy, and without the machinery and accessories for building one.”

Although Great Britain issued a proclamation of neutrality in 1861, the Confederacy frequently purchased ships from individual citizens in Great Britain but the British government would often seize these vessels as they made their way back to Confederate ports even though, Davis argued, Great Britain did allow cargo ships containing munitions of war to be shipped to New York, both of which Davis saw as a violation of Britain’s neutrality claims:

“Further instances need not be adduced to show how detrimental to us and advantageous to our enemy was the manner in which England observed its hollow pretension of neutrality toward the belligerents.”

End of the Confederate States of America:

The Confederate States of America came to an end after a series of devastating military defeats in the spring of 1865.

On April 3, 1865, the Confederate capital of Richmond, Virginia was captured by Union troops, which completely severed the Confederate government’s communication lines with its military.

On April 9, 1865, General Robert E. Lee surrendered his Army of Northern Virginia after being defeated at the Battle of Appomattox in Virginia and various other Confederate regiments followed suit shortly after.

“With the capture of the capital, the dispersion of the civil authorities, the surrender of the armies in the field, and the arrest of the President, the Confederate States of America disappeared as an independent power, and the states of which it was composed, yielding to the force of overwhelming numbers, were forced to rejoin the Union from which, four years before, they had one by one withdrawn. Their history henceforth became a part of the history of the United States.”

1 thought on “The Confederate States of America”