Although a writer by trade, Twain also served a brief stint as a Confederate soldier in the Civil War.

Twain was born as Samuel Langhorne Clemens in a small Missouri town called Florida on November 30, 1835. His birth coincided with the return of Halley’s Comet from its 75-year orbit through the solar system, a fact Twain delighted in.

At the age of 18, Twain left home for the New York City and Philadelphia where he worked at various newspapers. He eventually returned home in 1857 and became a riverboat pilot on the Mississippi. This new career came to a halt when the Civil War began and river traffic was disrupted.

Twain decided to join a Confederate militia, the Marion Rangers, but only lasted two weeks before he quit and went West.

It is not known exactly why Twain quit the militia. He defended his actions throughout the years by describing his confusion while enrolling and explained he was ignorant of the politics behind the war.

In his fictionalized account of his war experiences titled The Private History of a Campaign That Failed describes the moment he decided to quit:

“The last camp which we fell back upon was in a hollow near the village of Florida, where I was born – in Monroe County. Here we were warned that a Union colonel was sweeping down on us with a whole regiment at his heels. This looked decidedly serious. Our boys went apart and consulted; then we went back and told the other companies present that the war was a disappointment for us and we were going to disband.”

On the road home Twain and his friends ran into General Harris who ordered them to get back to their posts.

“Harris ordered us back; but we told him there was a Union colonel coming with a whole regiment in his wake, and it looked as if there was going to be a disturbance; so we had concluded to go home. He raged a little, but it was of no use; our minds were made up. We had done our share; had killed a man, exterminated one army, such as it was; let him [Harris] go and kill the rest, and that would end the war.”

Twain learned later on that the Union general who had frightened him so much was none other than Ulysses S. Grant.

At the time, Grant was a little-known military figure, but he quickly rose to fame shortly after he led a series of military victories that forced the Confederate army to surrender and brought an end to the war.

Years after his military service, Twain continued to face criticism on all sides for his involvement in the war and his alleged deserter status. He explained his military experience in a letter to an unknown recipient:

“I was a soldier two weeks once in the beginning of the war, and was hunted like a rat the whole time. Familiar? My splendid Kipling himself hasn’t a more burn’t in, hard-baked and unforgettable familiarity with that death-on-the pale-horse-with-hell-following-after which a raw soldier’s first fortnight in the field–and which, without any doubt, is the most tremendous fortnight and the vividest he is ever going to see.”

Twain also described the Civil War in general as: “A blot on our history, but not as great a blot as the buying and selling of Negro souls.” Whatever the reason, Twain left the military and never looked back. 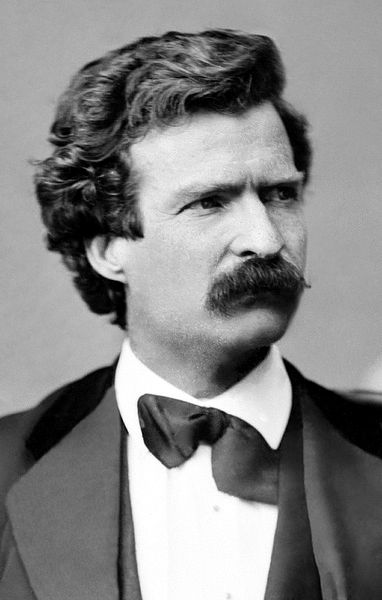 After a failed stint at silver prospecting, Twain went on to work for many newspapers such as the Sacramento Union and the Alta California.

It was during this time, in 1863, that he took the pen name Mark Twain. He married, had three children and continued to write and give speeches.

During the years 1874 to 1891, Twain wrote many novels such as The Adventures of Huckleberry Fin, The Adventures of Tom Sawyer and A Connecticut Yankee in King Arthur’s Court while living in Hartford, CT. He gained fame and fortune, although his finances took a hit after several bad investments.

Twain continued to write in his later years but developed a dark, cynical attitude that threatened to ruin his reputation.

In the early 1900s, he suffered a deep depression made worse by the deaths of two of his children and his wife. 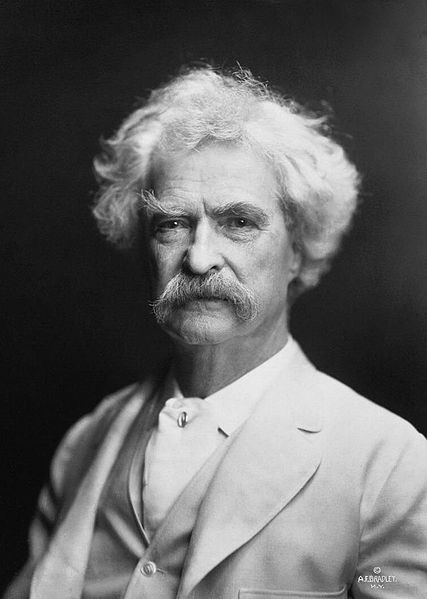 With failing health, Twain commented in his biography in 1909 about the return of Halley’s comet the coming year:

“I came in with Halley’s Comet in 1835. It is coming again next year (1910), and I expect to go out with it. It will be the greatest disappointment of my life if I don’t go out with Halley’s Comet. The Almighty has said, no doubt: “Now here are these two unaccountable freaks; they came in together, they must go out together.”

Mark Twain died in his sleep on April 21, 1910, two days after the comet’s perihelion. Twain is buried with his family in Elmira, N.Y.