There are many myths and misconceptions about the Civil War. Here are some facts and statistics to set the record straight.

♠ Two-thirds of all the 364,000 soldiers in the Union army died of disease. Only one-third died from actual wounds sustained during the war.

♠ Around 15 percent of all wounded Civil War soldiers died. In WWI, only 8 percent of wounded soldiers died and in WWII, this number was reduced to 4 percent. In the Korean war, it was as low as 2 percent.

♠ Common diseases during the Civil War were malaria, dysentery, arthritis and typhoid fever.

♠ Many of the nurses and doctors treating soldiers in the Civil War never attended medical school. Their medical training usually consisted of apprenticeships for medical practitioners.

♠ About 80 percent of the wounds soldiers received during the Civil War were in the soldier’s arms, hands, legs and feet.

♠ More than 3 million men and around 400 women fought in the Civil War.

♠ Bounties were offered to new recruits to encourage them to sign up for the army. A few states, like New York, offered as high as $677 dollars.  “Bounty jumping” quickly became a problem. Many recruits signed up, then deserted and signed up again in another state.

♠ The first federal income tax was established in 1862 to help finance the Civil War.

♠ About 29 percent of the 1,080 United States Army Officers at the outbreak of the Civil War resigned and joined the Confederate army.

♠ The average age of Union soldiers at time of enlistment was 25 years.

♠ One in every 4 Union soldiers was an immigrant. The majority of these immigrants were Germans and Irish.

♠ The bloodiest battle of the Civil War was the three-day-long battle of Gettysburg in 1863 with a total of 51,116 casualties. Yet, the battle of Antietam in 1862, which had 22,726 casualties, had the greatest number of casualties of any single day battle. 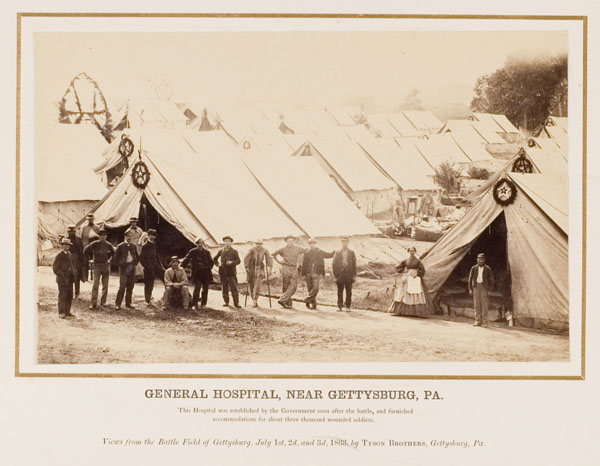 General Hospital Near Gettysburg PA circa 1863