During a trip to Canada in 1858 Harriet Tubman, one of the most famous conductors on the Underground Railroad, met fellow abolitionist John Brown.

Brown was in the middle of planning his famous raid on a federal arsenal in Harper’s Ferry and was in Canada trying to raise funds for the project.

When Tubman first laid eyes on Brown’s face, she realized she had seen it before. During the previous winter, Tubman told her friend Franklin Sanborn, editor of the Boston Commonwealth, of a reoccurring dream she was having. Sanborn later wrote about this discussion in an 1863 article in the Boston Commonwealth:

“She thought she was in a ‘wilderness sort of place, all full of rocks and bushes,’ when she saw a serpent raise its head among the rocks, and as it did so, it became the head of an old man with a long white beard, gazing at her ‘wishful like, just as if he were going to speak to me,’ and then two other heads rose up beside him, younger than he, – and as she stood looking at them, and wondering what they could want with her, a crowd of great men rushed in and struck down the younger heads, and then the head of the old man, still looking at her so ‘wishful'”

Although Tubman did recognize Brown from the dream, she still didn’t know what it meant until a few years later when Brown finally acted on his plans to raid the federal arsenal. During the raid, Brown brought two of his sons with him. After rounding up the citizens of Harper’s Ferry and capturing the arsenal, militia groups and soldiers surrounded Brown and his men.

During a long stand off, Brown’s two sons were killed and Brown was wounded when the soldiers rushed in on them with guns and knives. Brown was later executed. Tubman believed the snakes represented Brown and his two sons and the crowd of men were the soldiers surrounding them. 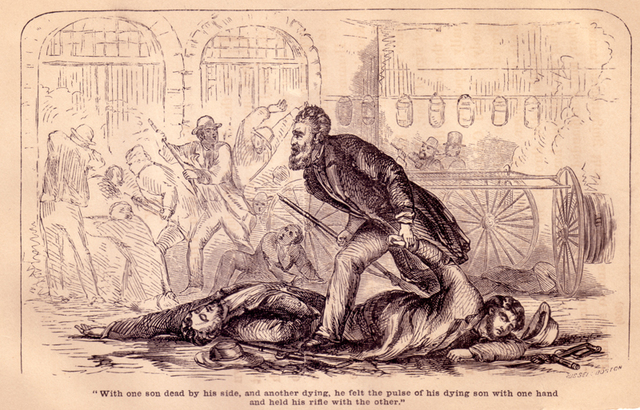 According to Sanborn, this was not Tubman’s first psychic experience. Tubman had told Sanborn that ever since receiving a head injury as a teenager, she began having not only fainting spells but psychic dreams and premonitions.

Before Tubman escaped from slavery, she said she had a dream where she flew over towns, fields and mountains “like a bird.” During the dream she saw “a great fence or sometimes a river,” as well as women dressed in white reaching out for her. She said she thought nothing of the dream until her escape to the north when she saw the very same places from her dream and met women along the underground railroad that resembled the women in her dream.

Tubman told Sanborn she believed her psychic powers were inherited from her father, Benjamin Ross. She said her sister had also inherited the ability and foretold the weather often and also predicted the Mexican War.

Sarah Bradford, a New York teacher who helped Tubman write and publish her autobiography, wrote about Tubman’s psychic experiences in her own book Harriet Tubman: The Moses of Her People:

“When these turns of somnolency come upon Harriet, she imagines that her ‘pirit’ leaves her body, and visits other scenes and places, not only in this world, but in the world of spirits.”

Whether or not Tubman’s dreams were actual psychic visions, Tubman remains an inspiring and iconic figure of the Civil War era.

3 thoughts on “Did Harriet Tubman Dream of John Brown’s Death Before She Met Him?”