Despite his connection to his Confederate-sympathizing brother, John Wilkes Booth, stage actor Edwin Booth voted for Abraham Lincoln in 1864.

John Wilkes Booth was reportedly deeply disappointed by his brother’s vote and lectured him for supporting Lincoln.

Although Edwin was 31 years old at the time of the election, it was his first time voting and he experienced a new found pride in doing his patriotic duty, according to a letter he wrote to his friend Emma F. Cary in November of that year:

“I voted (for Lincoln) t’ other day – the first vote I ever cast; and I suppose I am now an American citizen all over, as I have ever been in my heart.”

Surprisingly, the entire Booth family, including Booth’s parents Junius and Mary, were Union sympathizers and abolitionists.

John Wilkes Booth was the only member of the family who sided with the Confederacy, which caused tension between the two brothers, according to a letter Edwin wrote to Nahum Capen in 1881:

“Dear Sir, I can give you very little information regarding my brother John. I seldom saw him since he early boyhood in Baltimore. He was a rattle-pated fellow, filled with Quixotic notions. While at the farm in Maryland he would charge on horseback through the woods, ‘spouting’ heroic speeches with a lance in his hand, a relic of the Mexican war, given to father by some soldier who had served under Taylor. We regarded him as a good-hearted, harmless, though wild-brained boy, and used to laugh at his patriotic froth whenever secession was discussed. That he was insane on that one point, no one who knew him well can doubt. When I told him that I had voted for Lincoln’s reelection he expressed deep regret, and declared his belief that Lincoln would be made king of America; and this, I believe, drove him beyond the limits of reason. I asked him once why he did not join the Confederate army. To which he replied: ‘I promised mother I would keep out of the quarrel, if possible, and I am sorry I said so.’ Knowing my sentiments, he avoided me, rarely visiting my house, except to see his mother, when political topics were not touched upon, at least in my presence. He was of a gentle, loving disposition, very boyish and full of fun, – his mother’s darling, – and his deed and death crushed her spirit. He possessed rare dramatic talent, and would have made a brilliant mark in the theatrical world. This is positively all that I know about him, having left him a mere school-boy when I went with my father to California in 1852. On my return in ’56 we were separated by professional engagements, which kept him mostly in the South, while I was employed in the Eastern and Northern States. I do not believe any of the wild, romantic stories published in the papers concerning him; but of course he may have been engaged in political matters of which I know nothing. All his theatrical friends speak of him as poor, crazy boy, and such his family think of him. I am sorry I can afford you no further light on the subject. Very truly yours, Edwin Booth.”

Ironically, Edwin’s vote was not the only time he helped Lincoln. Sometime in late 1864 or early 1865, Edwin Booth saved Robert Todd Lincoln, Abraham Lincoln’s son, after he fell in front of an oncoming train in New Jersey.

Edwin Booth briefly retired from the stage, believing his career to be over, and the family withdrew from public life for years after.

Eventually, Edwin returned to acting but the family continued to live in the shadow of John Wilkes Booth’s deed for the rest of their lives. 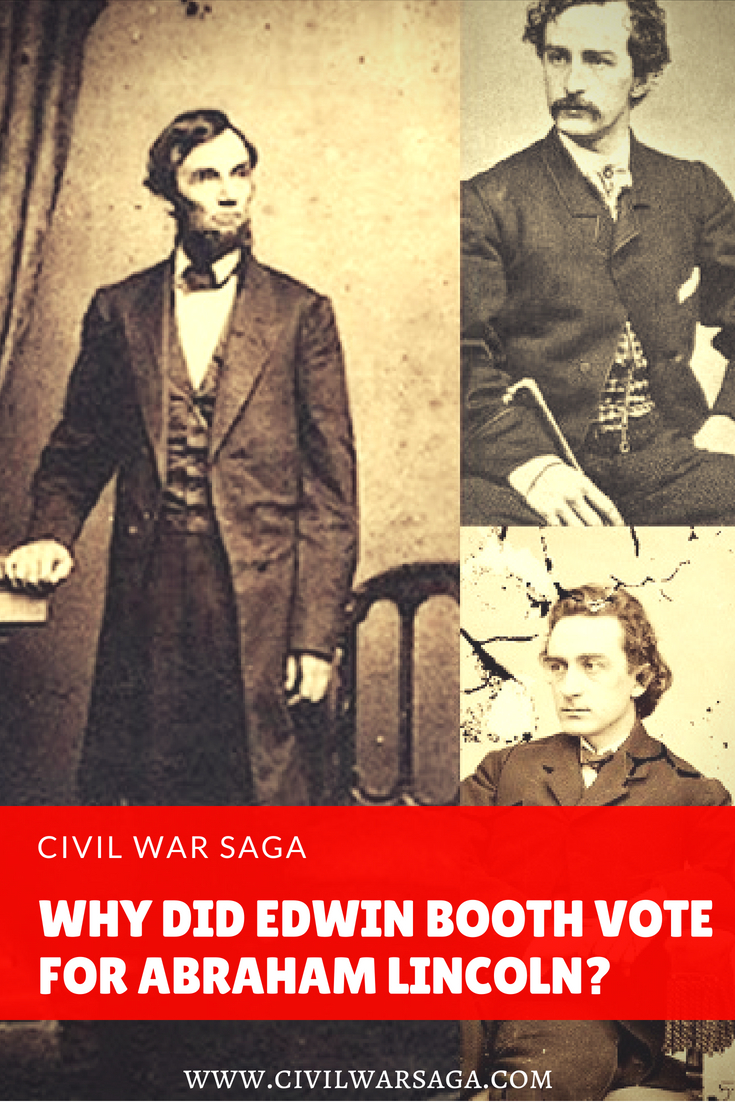