In a strange twist of fate, Edwin Booth, the brother of John Wilkes Booth, once saved the life of Abraham Lincoln‘s son Robert Todd Lincoln.

Sometime in late 1864 or early 1865, Lincoln was waiting to buy a train ticket in Jersey City, New Jersey when he was accidentally pushed off the railway platform into the path of an oncoming train.

Edwin Booth later retold the story to his friend Mr. William Bispham, who wrote an article about the incident in The Century Magazine in November of 1893:

“He [Booth] had started for Philadelphia from New York, and while he was standing on the platform of a car, still in the Pennsylvania railroad station at Jersey City, and just as the train was about to move, a young lad, going from one car to another, stumbled, and would have fallen between them, had not Edwin caught him by the collar of the coat and landed him in safety by his side. The boy, whom Edwin had never seen before, evidently recognized him, and holding out his hand said to him ‘That was a narrow escape, Mr. Booth’ and thanked him warmly. Two weeks later, Edwin received a letter from General Adam Badreau in which the latter mentioned that Robert Lincoln told him that it was his life that had thus been saved.”

Robert Todd Lincoln was asked about the story, to which he responded in a letter to the editor of The Century Magazine, Richard Watson Gilder, in February of 1909:

“The account is essentially correct, but it is not accurate in its details… The incident occurred while a group of passengers were late at night purchasing their sleeping car places from the conductor who stood on the station platform at the entrance of the car. The platform was about the height of the car floor, and there was of course a narrow space between the platform and the car body. There was some crowding, and I happened to be pressed by it against the car body while waiting my turn. In this situation the train began to move, and by the motion I was twisted off my feet, and had dropped somewhat, with feet downward, into the open space, and was personally helpless, when my coat collar was vigorously seized and I was quickly pulled up and out to a secure footing on the platform. Upon turning to thank my rescuer I saw it was Edwin Booth, whose face was of course well known to me, and I expressed my gratitude to him, and in doing so, called him by name.”

Although John Wilkes Booth had a rivalry with Robert Todd Lincoln and hated Abraham Lincoln, Edwin didn’t share his brother’s feelings and he even voted for Abraham Lincoln in 1864.

When Edwin’s brother later assassinated Robert’s father, Abraham Lincoln, Edwin probably took comfort in the fact that, despite his brother’s villainous deed, he himself had saved the president’s only living son. 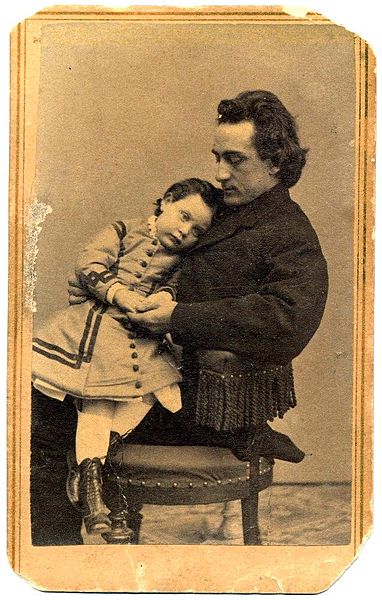 Edwin Booth with his daughter Edwina in 1864

This good deed apparently wasn’t enough to save Edwin Booth from being detained by Federal Marshals in Boston, Mass shortly after the assassination in April of 1865. After being questioned and searched, Booth was eventually released and allowed to return to New York. The rest of the Booth family were arrested and a few were imprisoned with the other suspected Lincoln conspirators but were eventually released.