Benjamin Butler was a Massachusetts Senator who served as a Union General in the Civil War.

Despite the fact that he was a Democrat and a Northerner, during the 1860 National Democratic Convention in Charleston, Butler voted 57 times in favor of nominating Jefferson Davis as the Democratic presidential candidate.

Much to the dismay of his colleagues, Butler declared himself a friend of southern rights and reasoned that only a Southern moderate could keep the Democratic party from splitting. 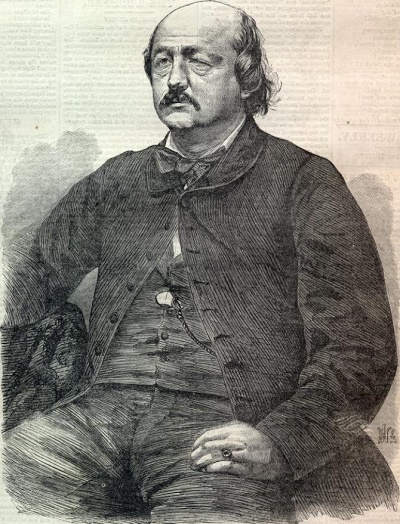 Illustration of Benjamin Butler published in Harper’s Weekly on June 1, 1861

Yet, when the Civil War broke out exactly a year later, Butler insisted he was on the Union’s side, declaring: “I was always a friend of southern rights but an enemy of southern wrongs.”

Due to Butler’s lack of military experience, he quickly found himself in trouble as a result of his many military blunders, such as his defeat at the Battle of Big Bethel and his mismanagement at Petersburg and Fort Fisher.

Ulysses S. Grant recalled Butler from his command and he was reassigned to the post of military commander of New Orleans in early 1862.

There, Butler found himself at the center of controversy when Southerners accused him of brutal treatment of civilians after he hanged a protestor who had ripped up a Union flag, censored southern papers, ordered soldiers to treat women protestors like prostitutes, allegedly looted homes and confiscated personal property of Confederate supporters, all of which earned him the nickname “The Beast of New Orleans.” 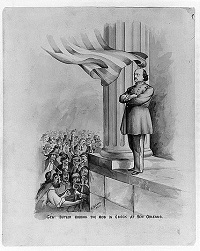 Ironically, in December of 1862, Jefferson Davis and Butler’s paths crossed again, this time when Davis, now President of the Confederacy, declared Benjamin Butler a felon due to his mistreatment of New Orleans citizens and called for his capture and execution:

“Now, there, I, Jefferson Davis, President of the Confederate States of America, and in their name do pronounce and declare that the said Benjamin Butler to be a felon deserving of capital punishment. I do order that he shall no longer be considered or treated simply as a public enemy of the Confederate States of America, but as an outlaw and common enemy of mankind, and that, in the event of his capture, the officer of the capturing force do cause him to be immediately executed by hanging…”

Fortunately, Davis never got the chance to carry out his orders as President Lincoln removed the troublesome Butler from his command that same month and reassigned him to Virginia the following year, where he later recruited Elizabeth Van Lew as a spy for the Union army.

After the Civil War ended, Butler returned to politics and served as a U.S. Congressman in 1878 and Governor of Massachusetts in 1882 before he unsuccessfully ran for president in 1884.