Sally Louisa Tompkins was a Civil War nurse and the only officially commissioned female officer in the Confederate Army.

The following are some facts about Sally Louisa Tompkins:

Born on November 9, 1833 into a wealthy Virginia family, Tompkins was the daughter of Colonel Christopher Tompkins and Maria Patterson and grew up on the family’s plantation in Poplar Grove, Mathews County.

After Colonel Tompkins passed away, shortly before the outbreak of the war, Sally relocated to Richmond.

Sally Tompkins During the Civil War:

Following the first Battle of Bull Run, the Confederate government asked the citizens of Richmond to help nurse wounded soldiers.

This prompted Tompkins to ask her friend, Judge John Robertson, who had recently moved out of Richmond to the countryside, if he would donate his three-story home near the corner of Third and Main Streets to the cause. He agreed and Tompkins turned the home into a 22 bed infirmary for wounded soldiers.

The Robertson Hospital officially opened on August 1 in 1861. The government assigned six surgeons and supplied only food, medicine and supplies to the hospital, with Tompkins covering the remaining expenses with her inheritance.

Tompkins was strict about cleanliness in her hospital, which resulted in a 94 percent survival rate among her patients. Of the 1,300 wounded soldiers sent to her hospital, only 73 died.

According to the book “An Encyclopedia of Women at War,” in September of 1861, after it was discovered that a number of private hospitals were overcharging the Confederate government, President Jefferson Davis called for the closure of all private hospitals.

This order ensured only military officials were allowed to run the remaining hospitals. Tompkins pleaded with the Confederate government to allow the Robertson Hospital to remain open, prompting them to take an unusual action:

“Tompkins, aided by William W. Camp, the assistant secretary of the treasury, appealed to the Confederate president Jefferson Davis. Impressed by her accomplishments as a hospital administrator, Davis commissioned Tompkins as a captain in the Confederate cavalry. Thus, Robertson Hospital, now run by an army officer, could remain operational. Tompkins accepted the commission; however, she refused to draw a salary for her position. Tompkins was the first, and only, woman to receive an officer’s commission in the Confederate’s armed forces. Her commission was dated September 8, 1861.”

Yet, other sources state that the hospital wasn’t ordered to close until Inspector of Hospitals William A. Carrington recommended it in his official report on Robertson Hospital, dated October 24th, 1862:

“Surgeon E. S. Gaillard Medl Director
I have the honour to report that I have this day inspected the private Hosl called the Robertson Hosl situated on corner of Main & 3rd Sts (Richmond). It has been occupied as a hosl since July 30th 1861. Having been leased free of rent by its distinguished owner Judge Robertson who had made it his residence for many years. A large yard surrounds it in which are the necessary out houses – The hosl building is an irregularly shaped wooden structure – the main building 3 stories high – In addition to an offices, Dining room kitchen & storeroom there are rooms affording a capacity for about 40 patients – 10-13 only now are in the Hospl. Surgeon A. Y. P. Garnett also in charge Genl Hosl no 3 is the only Medl officer of the Hosl & visits it daily or more frequently if necessary – The other attendants are one cook & 2 nurses. An Asist Surgeon formerly resided in the Hospital. Some of them I was informed rendered services gratuitously. I found order & neatness in every part of the Hosl which is supervised in rotation by the ladies who have it under charge – one or two being on duty every day. They exhibited a neat & accurate register showing that 539 patients had been admitted to date. According to the table prepared by the Surg Genl. To Sept 17th 1862 of 550 admitted – 44 had been furloughed, 57 Discharged & 46 Died. This is not a military Hosl in that there is no guards but little restraint exercised over the men; the house is not filled up with similar furniture to the Genl Hosls; having still much of the furniture of the owner’s in use – the food is of a better material than in the large Hosls being prepared and under the supervision of experienced ladies who consider the patients their guests. There is an absence of all that would remind the patient that he beds in ‘an institution’ & many things to make him feel that he is an individual cared for at home – This is an institution similar in origin & intent to other hosls previously inspected & reported – they originated to give form & consolidation to the private exhibitions of patriotism from the noncombatants of our city – when thousands wounded were brought in in one day they filled their post of usefulness and honour; but now the regularly organized institutions are more than sufficient for the demand upon them – they all have a surgical staff & attendants sufficient for their capacity & the government alone is able to provide for all the ordinary & extraordinary demand upon it – In previous reports on other private Hospls I stated other reasons why it would be better for the patients & for the service that this change be made, & in addition I will remark the great additional clerical labor in Reports acquisitions invoices – orders – rations – of property & provision. Monthly abstracts – muster rolls & payrolls &c &c &c for these Hospitals at the Surgeon Generals offic – the Medical Directors Medical Purveyor’s – Commissary – Q. M.s – paymasters – &c &c – In view of these things I recommend
(1) that the patients now in these Hosls be removed to Genl Hosl No. 3 which in order neatness & discipline will compare favorably with this or any other Hosl;
(2) that the support in Rations & Medl supplies be withdrawn;
(3) that the managers who deserve honour & commendation as among the heroines of the war be requested to such among our many wards (hitherto secluded from their presence) fields where their ministrations may be productive of greater usefulness.
Very Respectfully
Your Obt Servant,
Wm. A. Carrington
Surgeon & Inspector of Hospls”

According to the book “Richmond’s War Time Hospitals” this indicates that Tompkins must have received her commission much later than previously thought:

“It is often repeated that Miss Tompkins used the hospital’s low mortality rate as the basis of her argument for obtaining her commission and keeping the hospital open. However, her commission is dated September 9, 1861, less than two months after the opening of the hospital and well before any threatened closing of the hospitals. It has been suggested that Sally was not appointed until 1862 and that the date of the commission was backdated to the point of which her services were recognized to have commenced. However, the commission is signed by Leroy P. Walker, secretary of war. Walker resigned that post on September 19, 1861. What actually prompted President Davis to give Miss Tompkins her commission is unknown. Perhaps Sally was simply foresighted enough to realize that for her hospital to achieve permanence, she would have to transfer organizational and financial responsibility of it to the government and that she would have to work within the military framework.”

Regardless of when she acquired the position, her new role quickly earned her the new nickname “Captain Sally” among her patients and staff at the hospital. 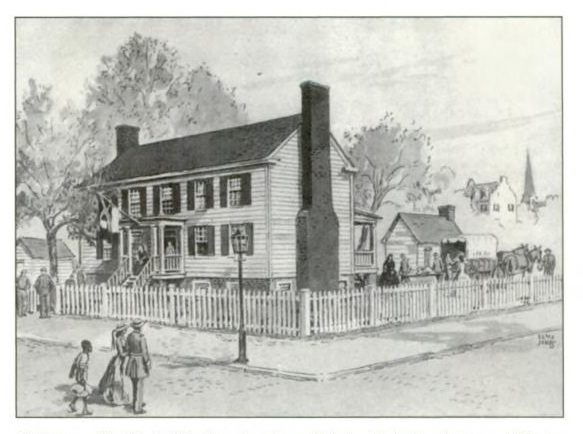 Illustration of Robertson Hospital in Richmond

The hospital remained open until the end of the war, officially closing its doors on June 13, 1865. In August of 1875, Robertson hospital was torn down and a new building took its place.

Sally Tompkins After the Civil War:

Although she had numerous marriage proposals, Tompkins never married and instead continued with her charity work after the war, helping widows and orphans of Confederate soldiers.

After spending most of her fortune helping others, Tompkins entered Richmond’s Home for Confederate Women in 1905 where she remained for 11 years until her death on July 25, 1916.

She was buried with full military honors at the Christ Episcopal Church in Mathews County, Virginia. 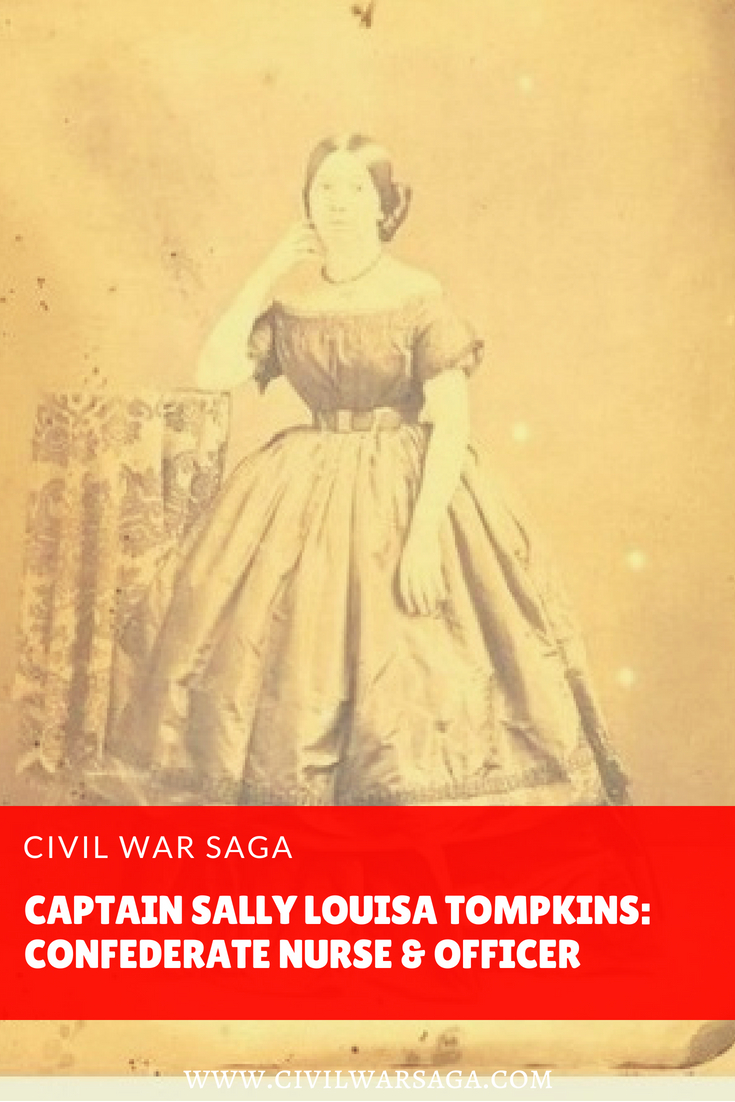 5 thoughts on “Captain Sally Louisa Tompkins: Nurse and Officer in the Confederate Army”