Mary Elizabeth Bowser was a slave who later became a spy for the Union army during the Civil War.

Born as Mary Elizabeth Richards, sometime around the year 1839, she was a slave of John Van Lew of Virginia.

After John Van Lew died in 1843, or 1851 (sources differ on the exact date), Elizabeth Van Lew and her daughter, also named Elizabeth, freed all of the family’s slaves, despite the fact that John Van Lew’s will didn’t allow it, according to a New York Times article:

“Mary’s freedom was likely de facto, not de jure, at least until after the war: both Virginia state law and stipulations in her husband’s will impeded Mrs. Van Lew from legally manumitting any of her family slaves.”

Bowser remained with the Van Lew family and worked as their servant. In the late 1850s, the elder Elizabeth Van Lew sent Bowser to be educated at a Quaker school for African Americans in Philadelphia.

Bowser later spent her teenage years as a missionary in Africa, before returning to Virginia in 1860 where she married Wilson Bowser the following year.

When the younger Elizabeth Van Lew began working as a Union spy during the Civil War, Mary Elizabeth Bowser assisted her in her intelligence gathering, as Van Lew described in her diary:

“When I open my eyes in the morning, I say to the servant, ‘What news, Mary?’ and my caterer never fails! Most generally our reliable news is gathered from negroes, and they certainly show wisdom, discretion and prudence which is wonderful.”

Since Van Lew was a prominent member of Richmond society, she was able to obtain a servant position for Bowser at parties held by Varina Davis, the wife of Confederate President Jefferson Davis.

This then led to a full-time position as a servant at the Confederate White House in Richmond.

During Bowser’s time there, she used her education and photographic memory to gather intelligence by reading military documents left out on desks or tables and eavesdropping on conversations.

Bowser then delivered the information to a baker named Thomas McNiven who made daily deliveries to the house. McNiven later described his activities in conversations with his daughter Jeannette:

“Miss Van Lew was my best source. She had contacts everywhere. Her colored girl Mary [Elizabeth Bowser] was the best as she was working right in Davis’ home and had a photographic mind. Everything she saw on the Rebel President’s desk she could repeat word for word. Unlike most colored, she could read and write. She made the point of always coming out to my wagon when I made deliveries at the Davis’ home to drop information…”

In 1865, Jefferson Davis figured out there was a spy in his house and eventually suspected Bowser, although it is not known how or why. According to the book “African American Lives,” Mary’s last act as a spy was an unsuccessful attempt to burn down the Confederate White House.

The Confederate White House at 1201 East Clay Street in Richmond, circa April 1865

There is very little information of what became of Bowser after the war ended. Like most spies, any information or documents about Bowser’s spy activities were destroyed by federal officials after the war in order to protect her identity.

Bowser allegedly kept a diary, which was discovered by one of her descendants in 1952, but according to an article by NPR, it was inadvertently discarded:

“And she [Mary Elizabeth Bowser] left a diary, a diary that McEva Bowser may have found in 1952 when her husband’s mother died. McEva Bowser: ‘I was cleaning her room and… I ran across a diary but I never had a diary and I didn’t even realize what it was… And I did keep coming across (references to) Mr. Davis. And the only Davis I could think of was the contractor who had been doing some work at the house. And the first time I came across it I threw it aside and said I would read it again. Then I started to talk to my husband about it but I felt it would depress him. So the next time I came across it I just pitched it in the trash can.'”

A recent article in the New York Times suggests that after the war ended, Bowser gave public lectures about her time as a spy, using a false name to protect her identity:

“On Sept. 10, 1865, The New York Times published a notice for a ‘Lecture by a Colored Lady’: ‘Miss RICHMONIA RICHARDS, recently from Richmond, where she has been engaged in organizing schools for the freedmen, and has also been connected with the secret service of our government, will give a description of her adventures, on Monday evening, at the Abyssinian Baptist Church.’ There can be little doubt that this was Bowser. And yet, as the use of a pseudonym suggests, she was consciously constructing a public persona. Reporting on the talk, the New York-based newspaper the Anglo African described Richards as ‘very sarcastic and … quite humorous.’”

The same article states that Bowser also met Harriet Beecher Stowe in Georgia in 1867, when Bowser was running a school for African Americans, and told her all about her time as a Union spy during the war.

What became of Bowser after the 1860s remains unknown. According to an article in Richmond’s Style Weekly in 2002, a historian doing research on Mary Elizabeth Bowser claimed to have found her grave in a cemetery in Richmond but refused to announce where until she received permission from Bowser’s living descendant.

In 1995, the U.S. Military inducted Bowser into the U.S. Army Military Intelligence Corps. Hall of Fame with a statement that read:

“Mrs. Bowser certainly succeeded in a highly dangerous missions to the great benefit of the Union effort. She was one of the highest-placed and most productive espionage agents of the Civil War.” 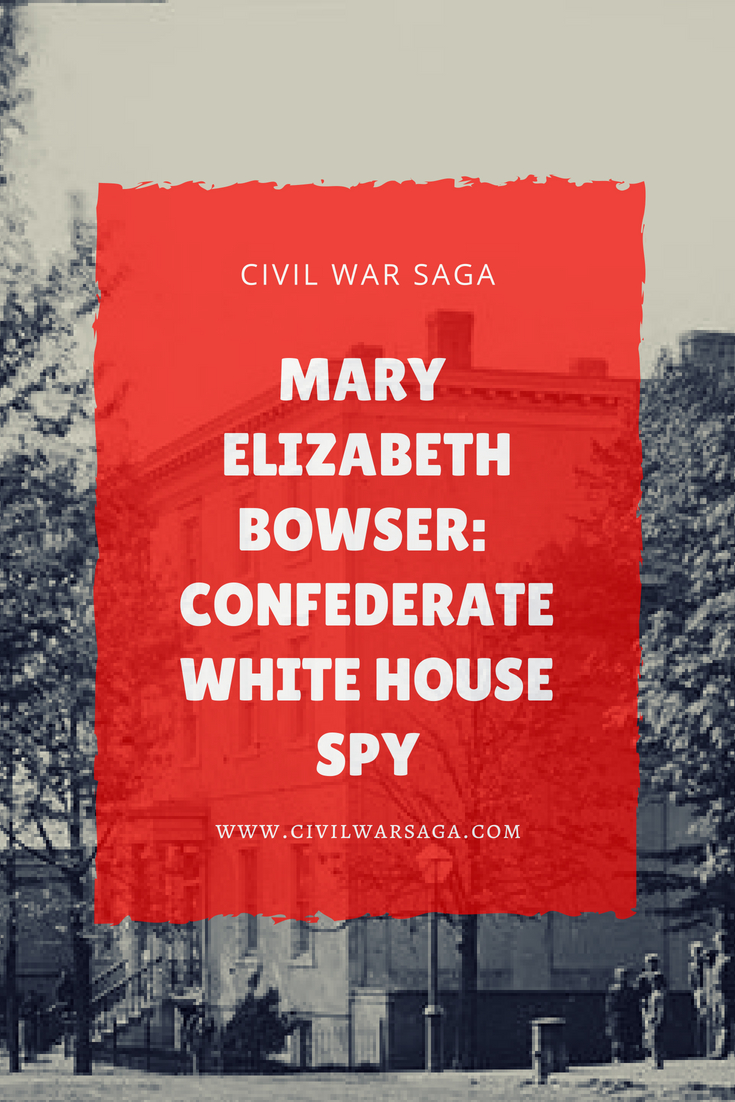