The Washington Monument in Washington D.C. was built between 1848 and 1884 as a tribute to George Washington.

Although plans for a memorial had been in place before Washington even died in 1799, the plans never came into fruition until the 1830s.

In 1833, a newly formed group called the Washington National Monument Society started a competition to find a design for the monument.

For 10 years, the society collected donations from the public as they sifted through scores of designs submitted by architects all over the country. 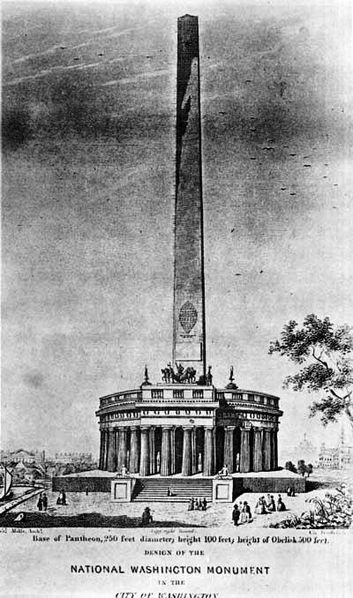 The society finally chose a design by an architect named Robert Mills. Mills had also designed the U.S. Treasury Building and the patent office.

Mills’ design called for a Greek pantheon temple with 30 columns at the base of a tall Egyptian obelisk.

Construction on the obelisk started in 1848 and the worked progressed slowly for six years until funding dried up in 1856.

At that point, the obelisk was only half completed and stood just 156 feet tall. After the “Know-Nothing” party failed at an attempt to raise funds and resume construction on the monument, the project still remained unfinished two years later.

When the Civil War broke out in 1861, it caused further delays. Due to the cost of the war, political chaos and physical danger as the war raged towards Washington D.C. and the surrounding areas, it appeared the monument would never be completed.

Even after the Civil War ended, the cost of reconstructing the war-torn south overshadowed the need to finish the project and it remained incomplete throughout the 1860s and mid 1870s.

The unfinished Washington monument photographed by Mathew Brady in 1860

On a trip to Washington in 1867, Mark Twain described the unfinished monument:

“It has the aspect of a factory chimney with the top broken off…cow sheds around its base . . . [with] tired pigs dozing in the holy calm of its protecting shadow.”

The centennial of the country’s birth in 1876 finally renewed the public’s interest in the project.

President Ulysses S. Grant signed a bill to restart construction on the project but by then the structure was deemed unstable and in need of an overhaul.

After looking briefly at some new design ideas, the Washington National Monument Society decided to stick with the original plan but eliminated the Greek pantheon at the base of the monument. Construction resumed on the monument later that year.

The only white marble that workers could obtain was a slightly different shade than the original marble, resulting in the faint color change at the 156 feet mark that can still be seen today.

The monument was finally completed in December of 1884, measuring 555 feet tall and weighing more than 8,000 tons. The monument is made of white marble from Maryland and Massachusetts and is underlain by Maryland blue gneiss and Maine granite.

The monument underwent a one million dollar restoration in the late 1990s to repair cracks and chips in the marble as well as repairs to the interior.

In August of 2011, a 5.8 magnitude earthquake resulted in major structural damage to the monument, causing visible cracks in the marble and damage to the elevator shaft.