Castle Thunder in Richmond, Virginia, was one of the few Confederate prisons that held not only male prisoners of war but women prisoners as well.

Located along Tobacco row, near Libby prison, Castle Thunder held around 100 women prisoners for various crimes, such as prostitution, spying and smuggling, although most of them were political prisoners. A few of these women were also female soldiers whose true identity had been discovered.

An article published in the New York Times in July of 1863, states that some of the female prisoners were also wives and children of Union soldiers who were captured after the Union defeat at the second battle of Winchester.

These women and children didn’t remain long at Castle Thunder as they were quickly transferred to the United States Hotel in Washington D.C.

Women and African-American prisoners were kept in a separate building at the prison while male Confederate deserters and male political prisoners were held in another.

Conditions at the prison were deplorable. Castle Thunder was filthy, overcrowded, disease-ridden and lacked adequate food and medical supplies for the prisoners.

Executions of Confederate deserters took place in full view of the other prisoners and a notoriously brutal captain, George W. Alexander, patrolled the prison daily accompanied by his aggressive black dog, Nero, both whom taunted and terrorized the prisoners.

The most famous of Castle Thunder’s women prisoners was Dr. Mary Edwards Walker. Walker was an army doctor for the 52nd Ohio Infantry who was taken prisoner after she encountered a group of Confederate soldiers at Tunnel Hill in Georgia.

Due to her unconventional profession as well as her trademark military uniform, a pair of trousers worn under her skirt, a military jacket and a gypsy hat, Walker attracted a lot of attention from the press and locals in Richmond.

The Richmond Sentinel published the following account of her capture on April 22, 1864:

“The female Yankee surgeon captured by our pickets a short time since, in the neighborhood of the army of Tennessee, was received in this city yesterday evening, and sent to the Castle in charge of a detective. Her appearance on the street in full male costume, with the exception of a gipsey hat, created quite an excitement amongst the idle negroes and boys who followed and surrounded her. She gave her name as Dr. Mary E. Walker, and declared that she had been captured on neutral ground. She was dressed in black pants and black or dark talma or paletot. She was consigned to the female ward of Castle Thunder, there being no accommodations at the Libby for prisoners of her sex. We must not omit to add that she is ugly and skinny, and apparently above thirty years of age.”

Walker spent six months at the jail, during which she wrote numerous letters to the press describing the horrible conditions at the prison.

She complained that her mattress was infested with insects, rats ran throughout the prison at night and food rations were meager and inedible.

According to the book Dr Mary Edwards Walker, later in her life Walker once even complained of a guard who had fired at her while she stood in the doorway to her cell, just narrowly missing her head.

On August 12th, prison officials finally released Walker in an attempt to avoid anymore negative press. For the rest of her life, Walker suffered from health problems caused by her malnutrition and exposure to disease at the prison.

Other famous prisoners included two cousins, Mary and Mollie Bell. The Bells were secret soldiers who had disguised themselves as men in order to fight for the Confederacy.

They fought for two years, under the command of General Jubal A. Early, and took part in a number of key battles, including the Battle of Gettysburg and the Battle of Chancellorsville, before their true identities were discovered after a fellow soldier reported them.

Upon discovery, the Bells were sent to Castle Thunder in October of 1864 and held for three weeks. With no official crime to charge them with, prison officials finally released the cousins and sent them home to Pulaski County, Virginia.

Castle Thunder remained an active Confederate prison until the fall of Richmond in April of 1865. Shortly before the city fell to the Union army, the prisoners were evacuated and sent to Danville, Virginia. The Union army later took control of the prison and used it for similar purposes.

After the war ended, Castle Thunder was returned to its original owners but was destroyed in a large fire in 1879. 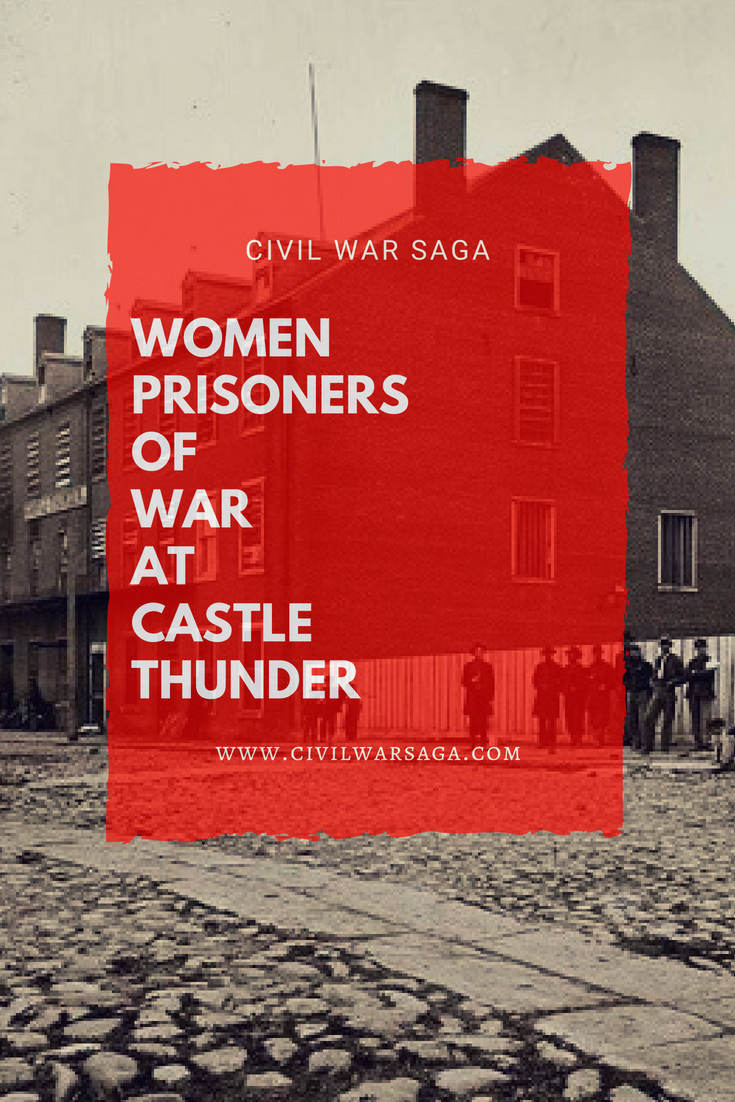