Paul Revere had a large family with a total of 51 grandchildren. Three of Revere’s grandchildren, Paul Joseph Revere, Joseph Warren Revere and Edward Hutchinson Revere, served in the Union army during the Civil War.

Paul Joseph Revere served as a colonel in the 20th Massachusetts Regiment along with Edward Hutchinson Revere who was an assistant army surgeon. Joseph Warren Revere served as a Brigadier General in the New Jersey Volunteer Infantry.

Both Paul and Edward were captured by Confederate troops during the Battle at Ball’s Bluff in Virginia in October of 1861. Edward was first taken to a Confederate prison in Leesburg and then to a prison at the Harwood tobacco factory in Richmond.

According to the book Massachusetts in the War, Paul, who was wounded during the battle, was held in the infamous Libby prison in Richmond, although other sources state he was held at Harwood with his brother:

“In the Battle of Ball’s Bluff, October 21 1861, he was wounded in the leg and made prisoner, being confined first at Libby prison and afterward being one of seven Federal officers made hostages for the lives of Confederate privateersmen held by the United States government on the charge of piracy. For three months he was with his fellow hostages confined in a wretched cell of Henrico county jail. He was paroled on 22 of February, 1862, and being exchanged May 2 rejoined his regiment before Yorktown.”

After his brother Paul was taken as a hostage and moved to Henrico County Jail, Edward wrote a letter home informing their family of the news:

“Paul and the other officers left us last Thursday for the jail, to await the trial of the privateersmen. There were seven in all from here, the rest of the fourteen being either in South Carolina or New Orleans. They are confined in one small cell, with two small windows. I hear from them everyday, but am not allowed to see them. You can imagine our anxiety to hear what action the government will take when they hear of their imprisonment, for there is not the slightest doubt in my mind that whatever is done to the privateersmen will be meted out to our unfortunate comrades.”

It was during Paul’s time at Henrico that he met Union spy Elizabeth Van Lew. Van Lew often visited Union soldiers in Confederate prisons in Richmond and brought them food, books and supplies, according to the book More than Petticoats:

On February 22, Edward and Paul were paroled (released in exchange for Confederate prisoners) and went home to await their official exchange, which occurred in May.

Just a few months later, Paul and Edward fought in the Battle of Antietam in September of 1862. It was during this battle that Paul was wounded again and Edward was shot and killed while caring for a wounded soldier. Fortunately for Paul, he made another full recovery and went back to war. 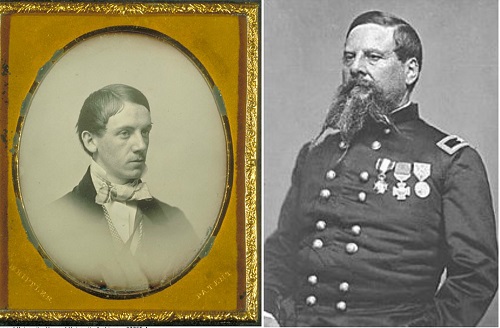 Paul’s luck ran out in July of 1863 when he led his troops in the famous Battle of Gettysburg in Pennsylvania and was wounded on the second day of the battle. He passed away just two days later. Paul was later posthumously promoted to Brigadier General.

Joseph was the only one of Paul Revere’s grandsons to survive the Civil War, but he had his fair share of bad fortune as well. At the Battle of Chancellorsville in the spring of 1863, Joseph withdrew his troops from battle without orders to do so, resulting in a court martial. Sentenced to be dismissed from the army, President Abraham Lincoln allowed Joseph to resign instead. Coincidentally, Lincoln was related to the Revere family through marriage, though it is not clear if Lincoln knew about this family connection during his lifetime.

In the late 1870s, Union spy Elizabeth Van Lew, who spent her family fortune helping Union soldiers during the war, lost her job as a postmaster and wrote to the Revere family in Massachusetts desperate for help.

Grateful for the aid she gave to Paul Joseph Revere while in Richmond, the Revere family set up a bank account for Van Lew with contributions from the families of Union prisoners she assisted in Richmond. Van Lew lived off these contributions for the remainder of her life.

When Van Lew died in 1900, Revere’s family even paid for Van Lew’s funeral and bought her a special headstone, according to the book Women in the Civil War:

“After her death, relatives of Colonel Revere bought a headstone for her grave. The headstone was made of Massachusetts granite with a bronze plaque that read: ‘She risked everything that is dear to man – friends, fortune, comfort, health, life itself. All for the one absorbing desire of her heart – that slavery might be abolished and the Union preserved.’ The stone has this marking: ‘This boulder from Capital Hill in Boston is a tribute from her Massachusetts friends.'”

7 thoughts on “Paul Revere’s Grandsons in the Civil War”